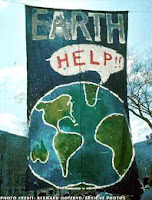 I was inspired this Earth Day to do something more than just the everyday recycling and energy conservation, so I joined Global Green USA (the US affiliate of Green Cross International) and became an e-Activist to stop global warming.

In addition to lending my voice to this important issue and becoming better informed, I'll receive special updates including Leonardo DiCaprio's new film The 11th Hour. The film's campaign motto is "Lighten your footstep." It has interviews with over 50 leading scientists, thinkers and leaders who discuss the state of the world and the state of humanity, including Stephen Hawking, and Mikhail Gorbachev. The film was selected for the Cannes Film Festival - Special Screening, scheduled to take place May 19th, and will be released to theaters later this year.

The 11th Hour and Leonardo DiCaprio were featured on the cover of Vanity Fair's Green Issue.
The Man of the Hour - excerpt from Vanity Fair magazine, May 2007

If you go to leonardodicaprio.com, you will find that it is split down the middle. The left half is labeled "Leonardo," and will bring you up-to-date on his filmmaking career (doing rather nicely, with a recent Oscar nomination for his performance in Blood Diamond and, to some tastes, an even stronger performance in best-picture winner The Departed). The right half is labeled "Eco-Site"; it offers guides to various environmental concerns, tips on differences anyone can make, and links to dozens of green organizations and information.

Not many stars share their fan face time with gorillas and ferns, but this is the image DiCaprio puts forward to the world: a literal expression of twin passions. A longtime environmentalist—remember his interview in 2000 with then president Bill Clinton for an ABC Earth Day special?—DiCaprio is currently on the boards of both the Natural Resources Defense Council and Global Green USA and has been a tireless promoter of green causes and events.

Later this year will see the fusion of his two passions with the release of The 11th Hour, a feature documentary on environmental ills and possible cures, a kind of state-of-the-earth address with gorgeous pictures and eloquent experts, which DiCaprio is producing, co-writing, and narrating. As he says in this remarkable film, as hopeful as it is alarming, "So, we find ourselves on the brink." On the brink of what, it is made plain, is up to us.

Press Release - 2005 - Leonardo DiCaprio to Produce New Documentary on Global Environment
NEW YORK - Leonardo DiCaprio has begun production on 11th Hour, a feature length documentary that will examine the state of the global environment, and includes visionary and practical solutions for restoring the planet's beleaguered ecosystems. The documentary will tackle an issue that DiCaprio has championed for years as it takes on a renewed urgency in the wake of recent natural disasters, and as increasing global abuse brings the future of our environment into greater question.

The film will be co-directed and written by Leila Conners Petersen and Nadia Conners, co-founders of Tree Media Group. DiCaprio will produce, co-write and narrate the project. The team has previously collaborated on Global Warning and Water Planet , short films that can be seen on DiCaprio's eco-site, http://www.leonardodicaprio.org/.

"Global warming is not only the number one environmental challenge we face today, but one of the most important issues facing all of humanity,"said DiCaprio. "We all have to do our part to raise awareness about global warming and the problems we as a people face in promoting a sustainable environmental future for our planet."