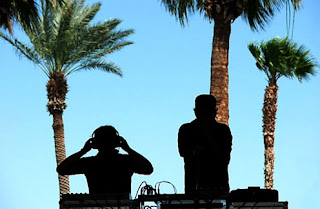 Who else is going this year?

We'll be there Friday. (Passing on Saturday and Sunday. All day events 2 days in a row was a bit much, but this year the 3 day event just isn't doable for us.)
We've gone to the Coachella outdoor music festival every year since 2001, with the exception of 2005. I had just given birth to my daughter a week prior and although it still crossed our minds, we opted to stay home that year. So this year will be the 6th time for us at Coachella.
One year we saw Bjork up close and personal - we were right in front of the main stage and that year there weren't as many people and it was WAY less crowded. That was one of the best concerts/performances I've ever been to. While singing Cocoon, Bjork stood facing the audience, with her back to a wind machine dressed in a costume that looked like a cocoon with the fabric flowing around her body. At the end of the song, as she stepped away, the fabric flew back into wings. It was enchanting and beautiful. (We also saw Bjork perform at the Hollywood Bowl. Even though that show had pyrotechnics, it was disappointing because the venue was just too big. It's better to see her at smaller, more intimate venues.) I can't wait to see what she has planned for this year. 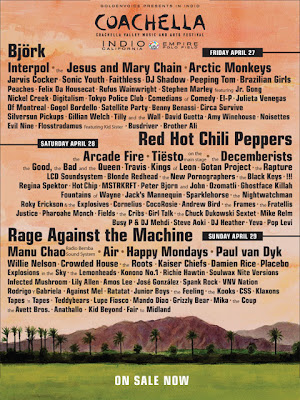 Last year we thought it might be our last year, because the lines were so long for everything from water, to the restrooms, to the food and bar. We've had VIP access in the past, and in the VIP area it's not so bad, but last year we just had regular admission and had to wait in long lines with the masses. It was pretty painful. I always forget how hot it is out there until I get there, and then we're hoarding water like our lives depend on it. (It feels that way at least.) But the music, the very cool art installations, being outdoors in the huge, grassy, polo area listening to live bands/DJ's with other people who are also having a great day in the sunshine, makes it all worthwhile.
----------------------------------------------------------------------
Then before you know it the new Coachella line up is posted, April rolls around again, and we've forgotten the heat and the misery and just remember how great it was, and hope that this year will be as great or even better than the last.
Posted by Rose at 4/23/2007