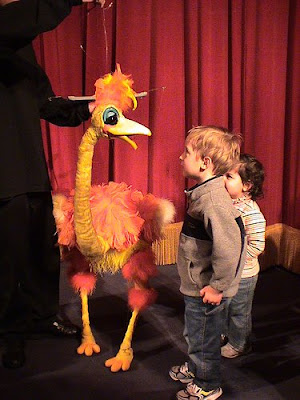 Watch their cute 30 second promo video here.
The Bob Baker Marionette Theatre is the longest running children's theater in Los Angeles, running continuously since 1961. The theatre is celebrating their 47th year, but they're also in jeopardy of going out of business due to the economy. I hope that more people will take their kids here over the holidays to enjoy the show and support the theatre. It's a piece of LA history and a magical place for kids. It would be a tragedy if they had to close their doors. I would like to see this theatre open for many more generations. 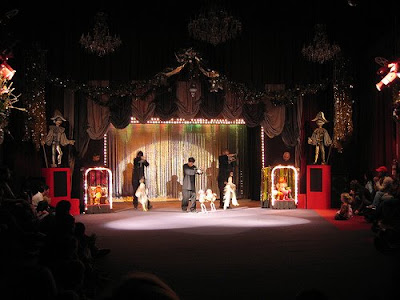 We went there last year on Christmas eve to see the Nutcracker show. It was whimsical and so much fun! You couldn't help smiling and feeling like a kid watching the show. And my daughter who was 2 at the time was mystified by all the beautifully made marionettes. We will be going back again to watch the show this year and hope you'll join us in supporting the theatre!

They also do birthday parties at the theatre, and they'll travel to your location as well. Something to keep in mind for Astrid's 4th birthday party.

Click on the link below to see more photos of the theatre and read my write up from last year:

In the past couple of days I've reconnected with people I haven't spoken to since I was a kid (literally from elementary school, junior high and high school). Long lost kids (now adults with kids of their own) that I never thought I would ever see or hear from again.

It's like traveling back in time. Just crazy stuff. And then to see how they turned out is truly something out of a science fiction novel. It's like fast forwarding 20 years later.

Revelations:
My junior high crush said he remember being interested in me but also be intimidated by me. It's hard for me to picture my 12 year old self as being very intimidating. But the fact that he remembers being interested in me back then - even if it's just a figment of his imagination - made the 12 year old inside of me smile. And of course the adult smiled even more knowing I'm in a better place in my life.

I found a childhood friend who used to live up the street from me, and we were friends since 1st or 2nd grade. My dad and her mom used to work at the same company in downtown LA eons ago - so even our parents knew each other. Then in the 7th grade we got into a fight that ruined our friendship. I always regretted never having said I was sorry. And lo and behold she's on facebook - and I jumped at the chance to apologize. Both of us can't remember what the fight was even about. And she surprised me by apologizing to me as well. This was one thing that weighed heavy on my heart for many years and now it's gone. (Ever seen the move "Flatliners"? It was like that. Instead of a little boy in a red, hooded sweatshirt chasing me - it was a little girl who I had been cruel to and it had been eating away at me for years.) I'm so thankful I got that opportunity and didn't have to carry it with me to the grave. And now catching up with her has been so much fun!

Another guy I knew in high school remembers me being "really smart" as he puts it. He owns his own bail bonds company and is very successful in his own right. He owns a home in Chino Hills and when the earthquake hit, he had just put in a new pool and the water was splashing up to 2 feet out of the pool. I mean you couldn't make this stuff up.

And then there's the guy who looked like Morrissey. He's an attorney with a newborn.

All this makes me think about my next high school reunion. I really want to go now. Enough time has passed that people really have changed and they're more real (hopefully!).
Posted by Rose at 11/25/2008 No comments:

I finally broke down and renewed my Classmates.com membership

After all the e-mails and enticements from classmates.com to see who has visited my profile over the years and sent me e-mails, I finally renewed my membership. And wow what a flash from the past!

My "secret" Junior High School crush was listed in my guestbook. Guess it wasn't so "secret" after all. I sat behind him in a class or 2 since in those days they used to sit us alphabetically by our last names and lucky me (or so I thought) the boy with the most perfectly feathered hair had a last name that started with "He". My Junior High yearbook is covered with "I love you Jeff" all over it, circling every photo he appears in, no matter how dorky. He ended up taking a blond girl with really big, poofy hair (aka damaged - probably from all that sun-in and crimping) and braces to the Junior High prom.

Now 23 years later - and here I see his photo in my guestbook and at first had no idea who this guy was. A guy with 4 kids - 2 kids in high school, and a set of elementary school aged twin boys. And then I see a photo of him dancing with his daughter and it was something about the smile that transported me back to my Junior High days when I hoped that he'd come to his senses and realize that I was a much better catch than the peroxide queen. No such luck. He barely said anything to me, as I wished upon a star and stared at the back of his head.

Come present day, he searched through our shared Junior High School (we went to different High Schools since I moved away after Junior High). He's still living in my childhood neighborhood and his kids are going to the same schools he went to. I can't even imagine. He looks happy though in the ton of photos of himself and his family that he posted. But I can still read between the lines with his career (he left his work e-mail address to contact him) and the choices he made in his life. Plus he still seems very full of himself so I can't feel too sorry for him.

Then there was another boy who I went on a group date to the movies with in High School, who left to get some popcorn during the movie's sex scene. His younger sister Summer was a contestant on The Apprentice.

And another girl who was a cute, petite blond with a hard edge. Turns out she joined the Air Force and now has a kid and lives in Oregon working at some plant doing quality control.

I'm still searching for Justin Velo, a Diamond Bar High School classmate, also a modern day beatnik who was unique, bizarre, interesting and kind. For my 17th birthday he drove me and a bunch of my girlfriends to a party at my friend's house in his baby blue VW van, and gave me Jim Morrison's biography. I had heard he moved to San Francisco and was working in a bookstore (which is easy to imagine), but no one's heard of him since.

And why is it I didn't know we had a guy name Frankenstein who graduated in my class? Seeing all the unrecognizable names makes me realize just how few people I really knew in High School.

I'm not one of those that ever looks back and claims, "Those were the best times of my life." That's a blessing! As my adult life now is so much better in every respect from my childhood. In some respects I remember Junior High better than any other period in my life since it was so traumatic. High School is a complete blur as I saw it just as a stepping stone to college. After college is when my real life started. As it should be. But it's still fascinating to see how we all ended up in adulthood.
Posted by Rose at 11/22/2008 No comments: 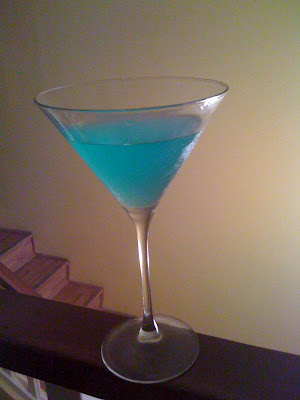 I was sipping on my Barack-o-tini as the election results were coming in. Ushering in a new era.