Recommended book "The Honeymoon's Over"

My husband knows that the way to my heart is through books. One of the gifts I received for Valentine's Day was a booked called, "The Honeymoon's Over" a collection of essays/articles written by 24 women writers bearing their souls about their marriages; exploring their experiences, feelings, struggles, and joy.

Last week I had torn out a magazine article from "O" magazine (with the nail salon's permission) written by Ann Hood, and brought it home to share with Uwe. Uwe was also touched by the story, and by researching the author he found that her article was included as one of the 24 stories in, "The Honeymoon's Over."

This book will make you laugh out loud, weep, and at times feel overwhelmed by the honesty of the material. This was the sweetest and most thoughtful Valentine's Day gift.

Here is an except from "A Love Story" by Lee Montgomery (What a great name!). This year marks her 20th wedding anniversary, but she and her husband Tom are celebrating 25 years of sleeping together.

"I fell in love with Tom Byrnes so hard it took my breath away. I had never loved, nor will I ever love anyone as much. After decades, I look at him and cry. I cry because he is my best friend. I cry because no one has loved me as much and I cry because this love is embedded in the smallest and simplest things. I love to hear him sing. I love the way he dissects the Sunday New York Times the same way every week. I love to watch him do stupid things with our stupid dogs or accost strangers with their dogs on the sidewalk. 'Hi, Killer,' he yells. I love to watch him play with kids, flirt with my mother, or hold his own mother's hand. I love that he is a clothes horse, no apologies offered, and the fact that he studies catalogs full of English handmade shoes. I have had the best sex, the best love, with my husband, and friends often comment on how we are made for each other. They tell us that they don't know any other couple as dedicated or so in love. It's true, I think, but it doesn't mean it's true every minute of every day.

When people ask if we've ever considered divorce, we laugh, and quote some wise soul. Divorce? Never. Homicide often. We've had some dark days, but the light ones outnumber the dark."
Posted by Rose at 2/14/2007 No comments:

Valentine's Day e-card from the hubby

This is the e-card my husband sent me for Valentine's Day. I got a good chuckle out of it. 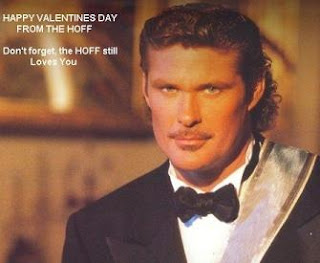 Recommended reading - "Holding On" aka "Love Me Do"

This morning I was sitting in a nail salon flipping through "O" magazine when I came across an article written by Ann Hood about marriage, love, loss, and holding on.

She writes about her old habit of giving up easily and moving on - including her first marriage, friends, homes, and jobs. "I leave movies that are boring and parties that aren't fun. Once in college, I left a waitressing job after an hour because they recycled the rolls from the breadbaskets. I leave the places I've called home with an ease and efficiency that is hard for some people to understand."

But that all changed in her second marriage. "I had promised my husband and all those people at my wedding that I wouldn't leave, but whenever we had a disagreement or a full out fight, I imagined packing my bags and getting on Amtrak to Penn Station. Sometimes, I said it aloud: 'I'm leaving! I'm going back to New York!' But after a while my husband, who is calmer and even more sensitive than I, pointed out that I had to stop threatening to do that. When you're married, he reminded me, leaving means divorce and emotional damage. He had no intention of leaving me, he said."

"Both of us had parents who had stayed married to each other forever, and happily. Somehow they had worked out their differences. Was I really going to uproot my family and our lives because my husband liked to spend Saturdays cleaning instead of loafing? Or a dozen other reasons...both small and large? The truth was, despite all this, I had no intention of leaving him either."

She writes about having their first son Sam, and then their second baby a few years later, a daughter they named Grace. "Arriving back at our little red colonial house after a week away, seeing Sam and Grace and Lorne waiting for me on the stoop with flowers in their hands, shouting 'Welcome home!' sweeping them into my arms, made me understand why people stick things out."

She gives us a peek into her family life and raising two small children:
"This is where I was three years ago: busy taking Sam and Grace to school, to ballet, to the rehearsal for Oliver, to play dates. They layered potatoes for potatoes au grain and apples for apple crisp. They set the table together, deciding which color Fiestaware plate each of us should get: Sam always took purple and Grace always took pink and Lorne and I got whatever they decided for us. After dinner we put on a bad dance tape and together we did the chicken dance and the macarena and the twist. At night, I read them Greek myths or Roald Dahl books. They fell asleep holding hands, and Lorne and I would stare down at our happy sleeping children."

And then an unexpected tragedy:
"Then, on a hot April day, Grace spiked a fever and died thirty-six hours later from a virulent form of strep. She was five years old."

She writes: "Some statistics say that fifty percent of couples who lose a child get divorced. Some statistics are even higher. It is easy to understand why. When your life is ripped apart, all the rules no longer apply. There is no order anymore: in your family, in your life, in the world. A week earlier, my mornings were all the same. I made my kids their lunches - ham on white bread, a yogurt, three cookies, and an apple for Sam; sliced cucumbers, cheese and crackers, blueberries for Grace - searched for clean underwear and matching socks, struggled to untangle Grace's hair and find Sam's homework, then drove them to school. Now, I didn't know what to do when I woke up. The life I had struggled so hard to create didn't exist anymore."

The aftermath:
"Eventually, Lorne went back to work. He put on his suit and went to his office. By my office was a tiny room off our dining room. It didn't provide any escape for me. Suddenly, the woman who ran away when things got tough had nowhere to escape to.

Our house filled with my friends. They held my hand and did our laundry and picked Sam up from school. They climbed into bed with me if they had to. In the evening, when Lorne returning from work, he came home to a house full of people. These are the kinds of things that tear grief-stricken couples apart. I craved for noise and conversation; he needed solitude. Lorne took comfort in sitting at Grace's grave and talking to her; I hated going there, hated the idea that my little girl was there, and avoided it. Church became a refuge for Lorne; but I hated God. The different ways two people grieve are enough to make them seem like strangers to each other. But losing Grace did the opposite for me. I saw the man I married as more precious."

The article caught my eye because of the photo of the family with small children, and the little girl in the photo (Grace) was blond and 1 year old at the time so she reminded me of Astrid. I could relate to the subject matter and what she wrote about maturing in a relationship. But then was thrown for a loop when she wrote about her daughter's death. That was completely unexpected. I had tears rolling down my cheeks. I had to stop and ask my manicurist for a tissue. When she looked up and saw that I was crying, I held up the magazine and said, "Oprah. There's a really sad article in here." After explaining what it was about my manicurist replied, "It's because you're a mother now. You feel things more deeply. When you hear about children or another mother's pain, you feel it too. I do the same thing. It makes me cry too."

More of the article:
"On a New Year's Eve six years earlier, we conceived Grace together. Except for the midwife, we were the only two people there when she was born. He's the one who put on the Simon and Garfunkel CDs and sat with me in the whirlpool until we climbed onto the king-size bed, with me pushing and Lorne coaching, brought Grace into the world. My husband is the person who, when Grace's head emerged, said, 'Here she is! She's the most beautiful baby in the world.' He cut her umbilical cord and walked with the midwife across the room and weighed our baby daughter. Together, we held her and said her beautiful name over and over, whispering it to her, announcing her to the world.

Lorne and I were by her side five short years later, in a cold room in an intensive care unit at the children's hospital, whispering her name again, this time desperately trying ti keep her from leaving us. I watched my husband climb onto the hospital bed, amid tubes and machines and monitors, press his lips to our dying daughter, and sing the Beatles' 'Love My Do'. We stood together, banished from her room, pounding on a Plexiglas window, as they tried one more futile time to save her life. We pounded on that window and together yelled her name: 'Grace! Grace!'.
We have been crying in each other's arms ever since. At first, after friends went home to their own families, we fell into bed together, exhausted and so filled with grief that we could only cry; words were too difficult, too meager. But slowly, our crying framed our stories. 'Rerember!' we would ask each other, using Grace's mispronunciation of 'remember'. Rerember that night she was born? The way she used to crawl, dragging one leg behind her? Rerember when she stuck the goldfish cracker up her nose? When she wouldn't leave the stage after she danced in a ballet of The Polar Express but instead stayed there, bowing and bowing, along in her white tulle?

These memories are ours, Lorne's and mine. We are the only people in the world who hold Grace's history. I used to think that leaving was the thing to do when times were hard. But having now lived through the hardest time, having made it because Lorne was by my side, holding me, and I was there holding him, I understand the virtue, the necessity of staying.

I am writing this on the eve of my eleventh wedding anniversary. Tomorrow night, Lorne will give me a gift. It will be our wedding picture cast in some new material. (Every year her husband makes her anniversary present out of their wedding picture, translated into paper or glass, or whatever material tradition deems that year's gift is.) I am holding a bouquet of white tulips; we are both grinning out at the world, our faces hopeful and happy; we are facing the future arm in arm."
Posted by Rose at 2/10/2007 1 comment: