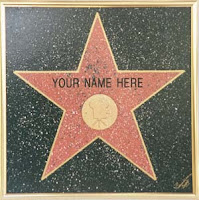 We're all familiar with the Andy Warhol coined expression from the late 1960's:
"In the future, everyone will be famous for 15 minutes."

The adaptation of this line that applies to our generation (the 21st century) is much more interesting:
"In the future, everyone will be famous to 15 people."

No longer is the fame of "everyman" a one hit wonder, but instead everyone is capable of being world famous in their own circles, as a result of online social networking, blogging, and other modern day online phenomena.

This rings true for me when I look at my own experiences and I can apply it to my own life:

I started a blog called We Love Astrid, in 2005 after the birth of my daughter to document my daughter's life, my life as a mother, and to connect to other parents out there and the world at large. What started as a personal outlet for me where I would write and post everyday to my blog about my life and daily adventures soon grew into something meaningful with a small following who would read my blog everyday. Some bloggers would even get upset if I went too long between posts because they were anxiously anticipating my posts after returning home from a trip, etc. So I had the added responsibility to my readers, in addition to my own enjoyment in receiving comments to blog entries. I never imagined that my blog would be read by people all over the United States, Europe, in Australia, Korea, and even China.

People started adding my blog as a link to their blog, and then their viewers would visit my blog and leave comments, and it just had a snowball effect. Then I was recognized one day in the grocery store. Uwe (my husband) said, "Well that makes sense, since you had Astrid (my daughter) with you." Since that blog has tons of photos of Astrid, and some with me with her, he assumed that if people recognized me in the real world it had to be because I was with my daughter. But I wasn't. I had gone to the store by myself one hot day in a pair of shorts and flip flops with my hair pulled back in bun and I think I may even have been wearing my glasses (not my usual contacts) and still they recognized me. That was an odd experience.

Then last night, Uwe and I went to the Colorado Wine Company in Eagle Rock for their wine tasting. The place was packed and I was telling Uwe how another LA blogger, Citizen Robot loves this place and they always come here, and the girl (I assume) keeps telling me I should check it out. Here's what little I know about Citizen Robot - 3 people contribute to their blog and they live nearby in Glassell Park so we go to the same local haunts. They seem to be pretty young 20 something hipsters who I presume work in some capacity in the Internet industry whether it be design, advertising, entertainment, etc.

Uwe turns to me and says, "Oh sh*t that means they're probably here and they recognize you." It was Friday night, the ideal night to be out drinking. So all of a sudden paranoia kicks in, as do the giggles after my 4th wine tasting, but I say, "No, even if they did see me, they'd never put two and two together and recognize me here in this environment." To which he responds, "Oh yes they will because we're together. Maybe if they saw us separately they'd never place us, but you've got photos of me on your blog too. Together we're a dead ringer. No one looks like us Rose. We're a pretty unusual looking couple."

Okay he got me there. I have to admit he's got a point. There probably aren't too many half German/Korean women with a blond haired, blue eyed German husband living in Los Angeles hanging out in a local haunt. You don't need to do a a lot of deduction to figure out that it's us. I still think it's pretty hilarious.

I guess my wildest fantasies about being a spy for the CIA or FBI are over, since my cover has been blown all to hell. But that's okay, what's the worst that could happen - someone approaches me and tells me how much they enjoy my blog or they think I'm inspirational because I traveled through Europe with a 16 month old?

I also got approached about writing a blog for money, by writing about my travels with the baby and baby products I liked. It was tempting, but I turned it down in the end because blogging for me is fun. It's something I do in my spare time for myself and my readers, not for the man. It shouldn't be about product placement. I heard that the lady from dooce gets paid to use products and then she writes about it. I used to enjoy reading her blog from time to time, but now it's got ads all over it and it doesn't have the same feel. Now it's seems like a marketing ploy to manipulate readers, vs. a desperate housewife in Utah who deals with the daily struggles of being a stay at home mom, which captivated her readers because it of the domestic quality it had and people could relate to it. If my own personal blog becomes just about making money, it loses all it's value.

I agree with you about blogging for money - shouldn't be done. But I disagree about dooce, I don't find she does product placement much at all and her writing style is funny and refreshing. If the ads bug you, download Ad-Blocker-Plus (a plug-in available for Firefox which allows you to right-click ads and block them from appearing when you load a page from then onwards).

The product placement and advertising I was referring to on dooce's blog goes beyond all the banner ads. My husband works in the advertising industry and he was approached by another firm for product placement on dooce's blog. They wanted him to ask his client to loan dooce one of their automobiles to drive around in and she would then write about it on her blog. She's done this with other products. I'm happy to say my husband didn't agree to it.

First of all, I don't know how many people will go out and buy a car just because dooce said she liked it. You're insulting your audience to think that way.

Regardless if her assessment of a product is still honest or not, it's a contrived situation, and there's an issue with credibility. Would she be talking about this product on her blog if she wasn't profiting in some way, shape or form from writing about it? I don't know, but I don't want to have that question in the back of my mind when I'm reading someone's blog.

When I say I love something, I'm not getting paid to say it, and I have nothing to gain from saying it, so no one questions why I'm saying it. I read blogs because I enjoy them. That experience is tainted if I feel I am being manipulated.

Hmm. I'm not sure I get what you are saying 100% - if her talking about a particular product doesn't influence your choices, then does it matter? I read her blog for its entertainment value, much like I would see the latest Hollywood blockbuster or watch a sitcom - both categories full of product placement and advertising, and not ones I take 100% seriously. There are loads of other more serious blogs that I read with a more critical eye - they're ones where I would resent subtle attempts at reader manipulation. Perhaps applying different "lenses" to my reading is my mistake?

Oana:
To your point - if product placement on a blog isn't effective, then why do it?

Because it pays: advertising people will pay you to do it, and because people (other than you or I apparently) fall for it?

And that's my point. Not to belabor this to death, but the fact alone that they're anticipating some people to "fall for it" changes the whole blog experience.

If you still can get entertainment value out of it - great. For some people the experience isn't enough to make them stay away, but for others it will. To each his own.

Dern! The one Friday I decide not to go to the CoWineCo is the Friday you are there! And yes, I think I would have recognized you, but perhaps I too would have been too drunk to say hello. When you hit that fourth glass on a stomach only full of small pieces of bread, you start to get silly!

(Anyhow for the record, yes, we are all youngish hispterish losers at Citizenrobot.com, and we live in Silverlake and Glassell Park and do not venture west of Fairfax all that often)

You were right - it was a lot of fun! It felt like a house party. It was cozy and intimate but packed and the staff were very nice and friendly. We ended up bringing home 5 bottles of wine that we purchased there. Where do you go to eat after the wine tasting?

We'll definitely be back for another Friday tasting. If you do see me, please feel free to introduce yourself. I'd like to meet ya. Plus I have no idea what you look like. No fair!