Margaret Cho speaks out about the Virginia Tech tragedy 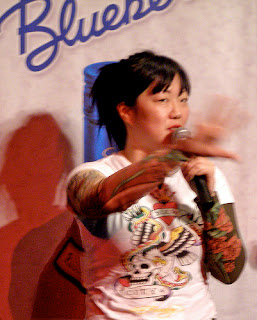 So much is being made of the "race" factor in the tragic shootings at Virginia Tech University on April 16, 2007, where a Korean American shooter killed 32 people and injured 29 more before committing suicide, making it the deadliest mass shooting in modern U.S. history.

Since I am of Korean origin, (my mother is Korean and my father is American/Caucasian) it's even been the topic of conversation in my own home. The day of the shootings I came home and had a conversation with my husband that started out like this:

Husband: Did you hear the shooter is Korean?
Me: Yes, I know.
Husband: What did you think when you found out?
Me: It surprised me to hear that he was Korean. Usually when someone goes postal it's turns out to be a white guy.

I found myself getting a bit defensive, but then I thought this is ridiculous that I'm somehow associated or linked to this guy (who clearly had psychological problems) just because we're of the same race. I'm white too, but no one asks how I feel when someone who's Caucasian does something crazy. It made me uncomfortable to be put in the position that I somehow had to defend the entire Korean race because of one bad apple.

In discussing this further we realized that regardless of race, when we're talking about the shootings at VT, or Columbine, or people showing up at work with a gun and going postal, we're missing the point when we try to narrow it down to race, because the shooters were Americans.

Margaret Cho is a Korean American stand up comedian, who I've loved since she did the University circuit back in 1991, (before she got famous and got her HBO special and sitcom) and did a free show at my school (University of California, Irvine). The whole audience was with her and understood her unique style humor, and afterwards my face hurt from laughing so hard.

Margaret Cho spoke out on her blog about the race issue, in a post titled, "Our Humanity." (See below.)

"Whenever anything really bad happens around Korean people, that is when I would like to hide, go to Hawaii and eat spam sushi until it blows over. I don’t want to comment on it because I don't want to escalate the situation and I don't want to implicate myself in it. I don't want to 'come out' as Asian because therein lies a tremendous responsibility that I never volunteered for, that I don't have any real control over, and that is as mysterious to me as it is to someone who isn't Asian.

So here is the whole terrible mess of the shootings at Virginia Tech. I look at the shooter's expressionless face on the news and he looks so familiar, like he could be in my family. Just another one of us. But how can he be us when what he has done is so terrible? Here is where I can really envy white people because when white people do something that is inexplicably awful, so brutally and horribly wrong, nobody says – “do you think it is because he is white?” There are no headlines calling him the “White shooter." There is no mention of race because there is no thought in anyone's mind that his race had anything to do with his crime.

So much attention is focused on the Asian-ness of the shooter, how the Korean community is reacting to it, South Korea's careful condolences and cautiously expressed fear that it will somehow impact the South Korean population at large.

What is lost here is the grief. What is lost is the great, looming sadness that we should all feel over this. We lose our humanity to racism, time and time again.

I extend my deepest sympathies to all those who lost their loved ones, their children, their friends and family, in this unimaginable tragedy. I send them all the love I have in me, and I encourage everyone to do the same."