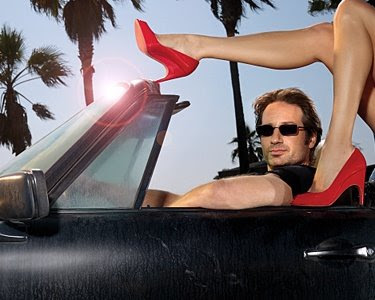 Californication is back for Season 2! Showtime Series on Sundays at 10 PM ET/PT. The entire 1st season is also available through On Demand in case you missed it. Highly recommend it.

It's shot in LA and is about a screenwriter Hank Moody, who moves to LA from NY after his novel gets picked up for a movie, and all the debauchery that takes place that ruins his relationship - while he's a very sweet, good guy underneath it all who is still in love with his ex girlfriend.

Hank Moody (played by David Duchovny)
Famed novelist & NYC transplant Hank relocates to LA after his acclaimed book is optioned, but it later becomes a crappy romantic comedy, which sparks a horrible case of writer's block. He's struggling to get his career back on track with the help of his agent/best friend, raise his pre-teen daughter, all while pining for his ex-girlfriend. It may sound desperate, but he enjoys life and owns all his various vices — drink, drugs and women — with a refreshing sense of honesty and unapologetic candor. He's holding it together while falling apart, and he doesn't mind it one bit.

Karen (played by Natascha McElhone)
Hank's long-time ex-girlfriend and the mother of his teenaged daughter. She was happy with struggling genius writer Hank when they lived in New York, but she can't begin to hide her disgust in L.A. Hank's inability to return to his promising craft and his immature, predictable behavior. Now that Hank is ghost writing the autobiography of a debaucherous famous record producer, how will she cope with Hank being surrounded on the daily by sex, drugs and rock & roll? Will her love/hate relationship with Hank jeopardize her sanity? 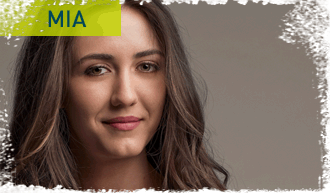 This sexy siren upends Hank's life in a way he could never imagine. Their one-night stand after meeting at a bookstore sends Hank's life into a tailspin. How could he know the hot chick who liked his novel was the 16-year-old daughter of Karen's ex-boyfriend? While Hank tries to conceal their romp from Karen, Mia is off promoting the manuscript she stole from Hank and has passed off as her own. It's a huge hit and Mia is relishing in her new found, totally unearned fame. Will Karen discover their affair? Will the world discover the book was plagiarized? Will Mia stop Facebook-ing herself long enough to care?

Hank and Karen's thirteen-year-old daughter has seen it all — watching her parent's bad breakup and her father's once promising career take a hit has made her wise beyond her years. But, unlike her mother, Becca truly accepts her father for who he is. The women come and go, but Hank's heart truly belongs to his daughter. But Becca's heart is now facing a bit of competition — it's Dad versus her new boyfriend who, coincidentally, is the spitting image of a young Hank. Whether that will be a good or bad thing remains to be seen...

Hank's best friend and agent lived life on the straight and narrow path and spent his free time trying to get Hank to kick his various habits and settle down with a good woman. But it all blew up — cataclysmically — in his face when an affair with his receptionist (among other peccadilloes) was caught on tape, earning him a pink slip and an uncertain future. A chance encounter lands him a new job as an agent to a budding porn star and a new Charlie is born. But his new star client's needs are proving a distraction from trouble brewing in his own home.

Marcy Runkle never minces words — she's a brash, hard core, unapologetic salon owner who loves her man above all. While Charlie plays it safe as a ten-percenter, Marcy is happy being way out in left field — they are the yin to each other's yang. But life stresses force old habits to re-emerge and Marcy hits a proverbial bump in the road. She trusts her husband unequivocally, but is too busy wrestling demons to notice how involved he has become with his hot new client.