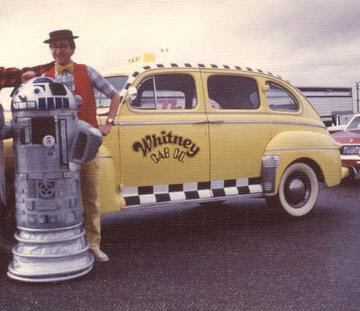 Does anyone else remember watching this show as a kid?
Posted by Rose at 6/10/2008

Uh yes! I remember it. I think they used to run it on PBS very early Saturday mornings.

I remember something about Whitney having a giant novelty pencil that he'd write messages with by the phone.

I remember the show quite well. I played the part of Corky and did all the music for the show.

Hi Corky,
It was a great show which I enjoyed watching as a kid. I only wish there were episodes available today that I could show to my daughter. Do you know of anywhere they can be purchased or downloaded?

I'd be happy to mail you an autographed picture. You can contact me at: rvgreene@hotmail.com

All the best to your family.

I have been trying to figure out the name of this show for years. I was very young when this show came out...about 2 years old and one day about 12 years ago, a vision of a robot, a taxi cab and a poorly functioning murphy bed popped into my head. I knew it was a show that I watched when I was young but I couldnt remember the name of it for the life of me. I asked my sister and all my friends if they remembered it but they all looked at me crosseyed LOL. Today I did some major sleuthing on Google and finally, found the name of the show. I'd love to get my hands on some episodes but it looks like they dont make them. Damn. At least I now know what it was called but it would be nice to relive some childhood memories by watching the show again. The photo of Whitney and the robot above really took me back...I feel warm and fuzzy inside.

Wow - I too just had this song pop into my head after who-knows-how-many years. I can still remember the theme song in my head, and would love to hear it. I can't find any videos or other media either.

Very sad to hear that the main actor is gone.

...and I thought I was the only one who did random searches of "Whitney and the Robot".

I remember when they went to the dump and there was a song about it.

Yes, 4U2 was an R2D2 knock off, but R2D2 never appeared on saturday morning!

...no no, wait, he did in that Droids animated series.

...now I have to search for that on Youtube.

I was about 4 in 1979. I remember playing with my pop up Jawa Transport thing that was made of a picture of the transport made of card board. I remember the song, it was very child like and amusing. A VERY fond memory. I wish I could watch this at least on You Tube or something one more time! I thought that as a kid 4U2 (which I remember his name still) was a very happy robot at a good memory to have as a child. THANK YOU.

You can watch an episode of Whitney And The Robot at:

"Jeff" wrote that he, "was very sad that the main actor died."

While one of the 2 actors that played the robot passed away, Jimmy, the other robot actor, and Whitney and Corky are alive and well.

At least, I haven't read my obit yet.

OMG I remember the song about "going to dump" too!

What else I remember so vividly about the show (besides Whitney always having issues with the murphy bed, LOL) was how he always opened the bottom part of the half-door and walked right into the still-closed upper part. Classic comedy for the little ones right there!

Thanks to all of you for sharing your memories of this SoCal favorite. I think Whitney & the Robot must have aired in a time slot before or after The Great Space Coaster, because I remember that pretty well also!

I remember that half door slap stick as well. Too funny.

The Great Space Coaster - deserves a separate post on it's own. That show was so bizarre. How did the line go? "No new is good news for Gary G'news"? And the speed reader. Oh boy - brings back a lot of childhood memories.

That was Corky who always was banging into the upper have of the door. Whitney was too cool to do that.

I used to watch this show as well when I was a kid back in the 70's. I can't seem to find much info on it online, not even on youtube which is a bit surprising.

The one episode that sticks out in my mind is the one where Whitney gets angry with Corky and Corky mopes around some park or something until they patch things up at the end. I also remember "Uhh well gee Whit!"

At some point this show was syndicated beyond southern California. I remember watching this show in New Jersey on WNBC-TV Channel 4 New York. It aired at either noon, 12:30pm or 1pm,I don't quite remember the exact time.
I've been looking for information on this show, as I'm the only one who seems to remember it. Oddly I remember the set of Whitney's house, it containes lots of browns, and the refrain of it's theme song: "With Whitney and the Robot the world's an open book, so with Whitney and the Robot come on let's take a look" I believe.
Strangely I don't remeber the robot (I forgot it's name) looking like R2-D2 as I'm a huge star Wars fan.

You can view an entire episode of, "Whitney And The Robot" at:

OMG, where do I begin reminiscing about this show. I watched this show while growing up here in LA and I didn't mind watching the episodes over and over. Whitney Ditburner's murphy bed, magic closet, and the dutch door to which the top door gets the last laugh, lol.

The episodes I can recall (LOTS of them) include when Whitney loses his voice while performing, the episode about cleaning up the house and recycling (keep/throw away boxes), race cars, and one involving a friend of Whitney's in an bike accident, which becomes a unicycle.

Other moments that come to mind are the one where poor Corky is left out and walking alone while Whitney is with female mime, the grocery store shopping, a visit to the airport and when 4U2 is left outside during a storm and his voice changes(?). And let's not forget the times where Corky and Whitney perform with Corky playing assorted instruments (drums, guitar, banjo).

I miss this show so much and glad that we fans can talk about this!

Thanks for this blog and for those who put on the show we know and love.

Wow....today is a special day for me....Ive been trying to remember the name of this show for well over a decade...always wishing I could see it again....i remember waking up very early on saturdays to watch it....i loved it.

Trying to remember the name was hard because apparently i was the only one who knew of this gem. All i could remember was 4-u-2. Which id google every so often and nothing....havent for a few years and decided to try it again....success.

I noticed our old pal Corky pops in every now and again. Thenk you sir !!

I loved this show growing up in the late 70's as well, along with "That's Cat."

There was a bizarre scene that stood out to me as a kid. Whitey and the Robot had an African American man as a guest and the Robot asked him why his skin was so dark. Whitey was visibly shaken by this. But the guest took it in stride and told everyone a story about how the sun in Africa toasted his ancestors skin dark, "like toast!" It was a very awkward scene, I would love to see that again if anyone happens to have it.

Wow! I was looking on Wikipedia for info on the Froozles, and came across an entry for Whitney and the Robot- the instant I saw the words, the theme song came flooding back to me, though I'm sure I haven't thought of this show in 20 years. Watching the various clips on youtube (the Horse Sense episode is on there in it's entirety) brought back a lot of memories. I remember the dutch door, and Whitney's Murphy bed, and the way Corky called Whitney "Whit", and 4U2's voice. I think this show was just so low key and on for so long that I took it for granted, enjoying it but not really noticing it. Then it was off the air and totally forgotten. Glad to see a bit of it back on youtube at least.

Thanks to Corky for chiming in here- though my memory of the show is vague, I do remember how entertaining you and Whitney both were to watch.

This series aired in reruns on KNBC NBC channel 4 at 6 AM on Saturday mornings.

My family and friends have told me for years I was insane and I had imagined this show! This is a wondrous day as I’ve finally proven its existence! Thanks to all for these comments. I am vindicated and uplifted! Love that Corky took the time to reply here.