Life after the reality show ends

This interesting article in New York Magazine features interviews with reality TV celebrities about how their 15 minutes of fame affected their lives. 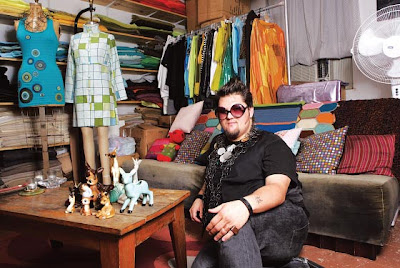 Jay McCarroll, baby-faced and hoodie-clad, works in the sort of space you’d expect from a fellow who dreams in fabric. It’s outfitted with four sewing machines and oceans of material arranged in brilliant spectral sequence; his spring 2007 collection hangs on a rack in the corner, anchored by a quilt skirt so audaciously outsize it could easily double as a bedspread. But bedding itself is missing from this studio, as is a kitchen and a shower, which matters more in this case than it ordinarily would: Though he’s the first- season winner of Project Runway, Jay, 32, is still homeless in New York.

“I haven’t been living anywhere for two years,” he says. “I sleep at other people’s houses. I sleep here if I’m drunk.”

Jay was one of the Bravo network’s first guinea pigs in the competition reality genre, a brightly imaginative new form that mixes the more mundane conceits of The Real World and Survivor with contests involving genuine skill. In exchange for a few weeks of reality-style exploitation, contestants have a chance to show the world what they can do—with a sewing machine, with a pair of scissors, in a kitchen, in an undecorated room—and in the aftermath find their careers in full bloom. But the shows, it turns out, are the easy part. “I have a fucking gazillion e-mails from all over the world from people asking, Why isn’t your stuff out there?” says Jay. “Yet financially, I have no way to get them a product because I got pushed out of a boat and into the ocean, as if, Oh, you can survive now.”

This isn’t what one would assume, of course. One would assume he’d be a money magnet after his star turn. Certainly Jay assumed as much. “You don’t think I took the fucking bus to New York the day after I won the show, thinking someone was going to come up to me on the street and say, You’re awesome, here’s money?” he asks. “I thought that for two years. But I’ve given up on that.”

Had Bravo not invented Project Runway, Jay would probably still be back in Lehman, Pennsylvania, where he ran a vintage-clothing store (before that, he was producing online porn). But because of the show, Bravo and Bravo watchers expected quite a bit more from him. Project Runway wasn’t some competition gimmick like Fear Factor or The Amazing Race, where the contestants’ skills only served the needs of the show. Jay’s talents were practical and real, and Bravo gave him a platform to showcase them. If he couldn’t succeed in the aftermath, why were we watching? Of what use was the show?

That’s pretty much how Jay saw it, too. He’d worked for five straight months, with zero pay and little sleep, to appear on Project Runway and create a collection for Bryant Park. Audiences adored him. The show owed much of its success, let’s face it, to him. So what did Jay get out of it?

The trouble is, celebrity came easily to Jay. Business did not. On the show, Jay was wicked and entertaining and cheerfully provocative, but he hardly had the means, savvy, or professional temperament to navigate the New York fashion world. (His first voice-mail message to me, ever: Hey Jen, this is Jay McCarroll … Um, I am free tonight and all day tomorrow to do this bullshit. Fucking call me, would you?) “A week after I won the show, I met with two ladies from Banana Republic at the top of the Soho House, which is like, big time,” he says. “And they were like, ‘Oh, we can give you numbers for factories to get your clothes produced.’ But that was totally not anything like what I needed. What I needed was someone to sit down with me and say, Here’s how you start a fashion label.”

Before long, the blogs started to howl that Jay’s work was nowhere to be seen, and Tim Gunn, the kindly host and soul of Project Runway, was wondering aloud to the press why Jay hadn’t gained more momentum; he also castigated him for being a diva.