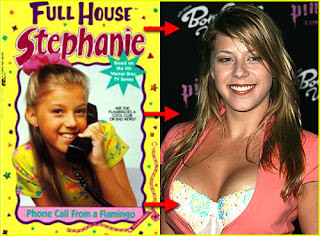 We hear so much about the Olsen twins and all of their problems (eating disorders and boys), that you almost forget there was another little girl Jody Sweetin (who played the middle sister in the TV sitcom "Full House" (as well as Candace Cameron who played the oldest sister).

Jodie, who's 25 now, popped back onto my radar when I saw a recent (really bad) photo of her on awfulplasticsurgery.com, (a guilty pleasure of mine) with an armpit scar from a botched boob job. 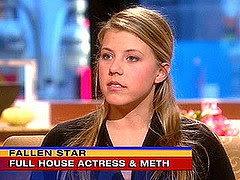 I was sad to read that she's had a really hard time since the show ended. She's been married twice (the first time at age 20) and had a crystal meth addiction. She's quoted as saying, "It is kind of hard to figure out who you are when you've lost your job at age 13, when that was basically how you identified yourself."

She appeared on "Good Morning America"on February 1, 2006 to talk about her two year addiction to meth.

"I get recognized all the time, although people are like, 'Oh my gosh, you're not, like, 11 any more!' It's funny. People don't expect you to grow up."

I wouldn't have recognized her at all. She looks completely different as a grown woman. 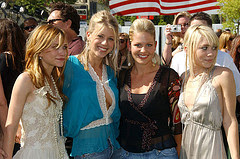 i love you guys has little girls you were so funni! i hope that you are all still real close. jodi, marykate and ashley, i look up to you but i think you guys should stop the drugs - why listen to a 15 year old right but i know tht you guys are prob looking up to me now! Candance i hope you NEVER do drugs. the other three of you please stop!!!!!!!!!!