Where are they now? - Lou Diamond Phillips 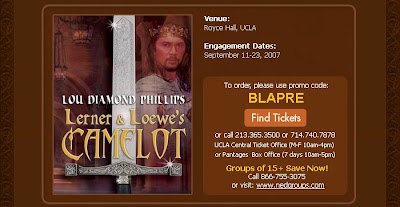 “This September, CAMELOT rises once again for a brief shining moment, high on the hill, at UCLA’s magnificent Royce Hall. If you find yourself longing for CAMELOT these days, make plans to relive one of Broadways’s most beloved musicals in a glorious new production starring Lou Diamond Phillips as Arthur the legendary king. Tony-nominated for his Broadway performance in The King and I, Phillips will wear the Crown in one of history’s greatest love stories.”

At first when I saw this e-mail announcement today, I thought it was a joke (i.e., photoshop). But then I realized it's legit coming from Broadway/LA. (I'm on their mailing list.) I had no idea that Lou Diamond Phillips has been doing musicals lately on Broadway. I knew he could sing, from La Bamba, but I never pictured him in musical theater. The last movie I saw him in was "The First Power" a horror movie, back in 1991. According to imdb.com, he's also currently shooting "Aquaman" the TV series, playing the role of Aquaman's father.
Posted by Rose at 7/31/2007

Yup. He's actually Tony Award nominated for THE KING and I.