Graffiti in Los Angeles: Art, Vandalism or Both? 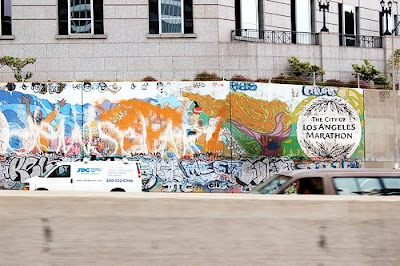 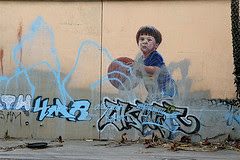 This hit home for me as I remember seeing the beautiful murals along the freeway in Downtown LA as a kid, but now they're so badly defaced that they're sad to look at. I also feel sorry for the local mom and pop shops in my neighborhood that have to constantly paint their walls to cover over the graffiti. (Sometimes it's good when it rains in LA - it keeps the taggers away.) 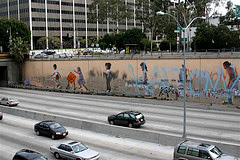 Dan Freeman, (the Maintenance Deputy for California Department of Transportation’s District 7) acknowledged that the California Department of Transportation has spent almost $2 Million dollars in the past two years restoring murals defaced by graffiti, and they can't keep up. He said that most of the murals in LA were done around the 1984 Olympics and they were painted low enough to the ground where they're easy access for taggers. He said they haven't figured out a way to remove the graffiti without removing the art, so they just leave the graffiti.

"Long before graffiti was adopted as the visual expression of hip-hop culture in the 1980s, Chicano gang members in East Los Angeles had been developing stylized calligraphy and writing on walls. Cholo (gangster) scripts became the first distinctive letter forms to evolve in the modern vernacular tradition of graffiti writing. Today Los Angeles writers of diverse backgrounds draw from a unique confluence of cultures that has led to regionally distinctive styles.

Graffiti L.A. provides a comprehensive and visual history of graffiti in Los Angeles, as well as an in-depth examination of the myriad styles and techniques used by writers today. Complementing the main text, interviews with L.A.’s most prolific and infamous writers provide insight into the lives of these fugitive artists. Essential to the understanding of the development of the graffiti movement, this book will be an invaluable source to graffiti fans around the world."

In my opinion, graffiti is definitely one of the most hardest forms of art because you cannot erase. On the other hand, the vandalism aspect of graffiti art thereby can be considered as an art form. Just imagine that you wake up in the morning, and see your house wall or front colorfully painted! What will be your reaction? Just click on http://bigessaywriter.com/blog/graffiti-wall-art-or-act-of-vandalism to see the answer!