I Can't Believe "The Sopranos" Is Coming To An End 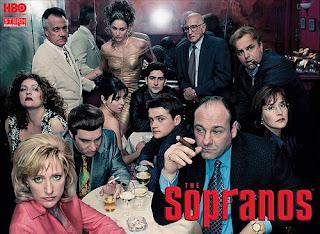 I have fond memories of "The Sopranos". Uwe and I started watching the series one summer after Uwe had shoulder surgery, about 7 years ago. We holed up inside and watched the first two seasons on tape. I remember our viewing saga even inspired us to make a trip out to the West Side that summer, to an Italian bakery, where we had Italian ice cream and cannoli (tube-shaped shells of fried pastry dough, filled with a sweet, creamy filling). After watching the characters on the show eating cannoli all the time, we suddenly developed a craving for it, even though we had never tried it before. That was a beautiful, memorable summer for us, and in the years following we always looked forward to getting together on Sunday to watch the show together, as a way to end the weekend and gear up for the week.

The cast and writing have been superb and it feels unreal that the show is ending. This Sunday will be the season finale and final episode.
So while I'm sad to see the series end, reading about other Sopranos fans and their love for the show made me smile. Enjoy!
----------------------------------------------------------------------
"Sopranos" filming locations draw mobs of fans
By Christian Wiessner
LODI, New Jersey (Reuters) - Every Saturday afternoon, the staff at the Satin Dolls go-go lounge clears the bar of matchbooks, coasters, napkins and anything else not nailed down because a sold-out tour bus is on the way from New York.
But the luxury coach heading for the nondescript, windowless building on a busy stretch of New Jersey highway isn't carrying rowdy bachelors with Bacchanalia in mind.
Soon, about four dozens fans of the hit television series "The Sopranos" file into the club, which since 1999 has doubled as the show's notorious, mob-run strip joint, the Bada Bing. 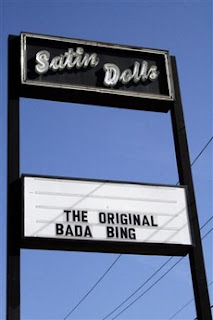 "Everything gets stolen off the bar, even if it doesn't say 'Satin Dolls' or 'Bada Bing' on it," said club manager Rouz, who, like the scantily-clad young women working the brass poles behind the bar, prefers to be known by just his first name.
HBO broadcasts the series finale of "The Sopranos" on June 10, and locations made famous by the saga of a northern New Jersey mob boss struggling to keep both his "families" in line attract flocks of fans.
"The 'Bada Bing' brings extra attention from people who wouldn't normally go to a go-go bar," Rouz said. "Most of them come in and have a look, then buy some merchandise and leave. And they don't know about the state laws."
Rouz was referring to the poetic license taken by the show's producers regarding New Jersey's policy on topless dancing and establishments that serve alcohol: you can have one or the other, but not both.
So while Tony Soprano and his crew sit in "the Bing" and plot their latest crimes amid a gaggle of topless dancers, Satin Dolls patrons are entertained by girls wearing bikinis and lingerie, albeit of the skimpiest variety.
One of the tour bus visitors is Paul Rickard of Inverness, Scotland, who says his rabid devotion to the show has little to do with the mob-related plot lines.
"It's about family, food and togetherness," he said between sips from a beer. "The mob is just a job, a distraction. Despite scenes of extreme violence, the show is about love."
Swiss tourist Antony Simone, sitting just down the bar from Rickard, says he's dreading a world in which he won't have fresh episodes to look forward to.
"I would like no end, because the Mafia has no end," he says.
PIZZA WITH MOB TIES 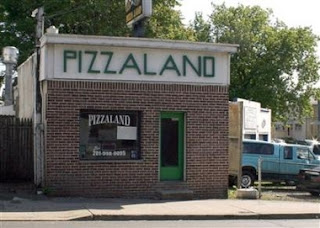 While "the Bing" has played a central role throughout the show's run and understandably attracts a fan following, any association with "The Sopranos" can prove a boon for business.
Pizzaland, a few miles south of Satin Dolls in North Arlington, appears for about one second during the show's opening credits. Despite never actually being in an episode, the already-thriving neighborhood favorite saw pizza sales spike once the show gained popularity.
The surprise to owner Paul Pawlowicz was how big a slice of his revenues now comes from shipping pizzas nationwide.
"They get shrink-wrapped, put on dry ice, and shipped overnight," Pawlowicz said as he pulled a steaming pie from the oven. "This week alone I've shipped pizzas to Texas, Louisiana and California, and I've sent 58 pies to a guy in Safety Harbor (Florida) this season alone."
"Hey, it's good pizza," he says, then adds a line that would be right at home in an episode of the show: "Once I get a customer, I got 'em for good."
THE HOUSE ON THE HILL 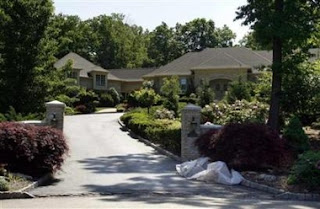 Interior scenes of the Soprano family home are actually shot on a soundstage in the New York City borough of Queens. But exterior shots, often showing Tony in an open bathrobe shuffling down his steep driveway to pick up the newspaper, are set at a "real home" in the affluent town of North Caldwell.
No federal agents taking pictures or waiting to have a "talk" with Tony were seen parked in front of the house on a recent drive-by. But the code of omerta was in effect for two carloads of fans circling the cul-de-sac to have a look at the house: both sped off quickly when approached for a comment.
PORK STORE? WHAT PORK STORE? 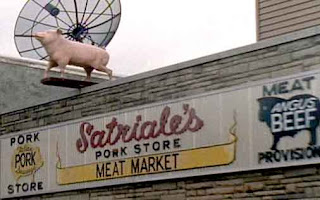 While most of the well-known locations on the show are actual commercial establishments, Satriale's pork store in Kearny has never existed. 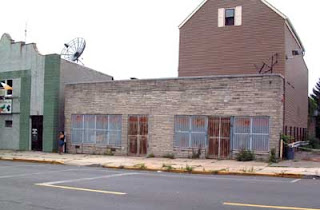 Signage and the large pig that sits atop the brick-faced building were put up only for filming, and the site that saw its share of sit-downs and dismemberments will soon be whacked itself: Kearny officials say the town's planning board has approved an application from the owner to turn the property into condominiums.
Whether sight-seeing fans will continue to seek out "Sopranos" locations after the show's finale remains to be seen. But tour bus guide Marc Baron of On Location Tours (http://www.screentours.com), who has been an extra in several episodes, is optimistic.
"There is such an interest from overseas fans and the popularity of the show has only grown since it began showing on A&E," Baron said, noting the cleaned-up reruns now showing on another cable station. "I think we've got a good five years left."
Posted by Rose at 6/06/2007