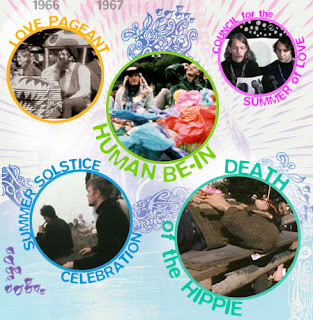 The Year of the Hippie
In the mid-1960s, young people who embraced a non-traditional lifestyle began moving into the Haight neighborhood of San Francisco. As had earlier groups like Beatniks and Hipsters, they rejected mainstream society, but their taste for rock music and wild colors was new. Some tagged this group as junior-grade Hipsters -- "hippies" for short. An underground newspaper, The San Francisco Oracle, chronicled the movement, often with psychedelic flair.
In October 1966, a group of San Francisco hippies staged a Love Pageant. As stories and images of hippies spread, thousands of young Americans flooded the city, wanting to witness or be part of the action. A year later -- after the 1967 "summer of love" -- San Francisco hippies performed a rite they called "The Death of the Hippie."
Posted by Rose at 6/06/2007

I actually watched the same documentary just a few weeks ago. Really, the history of the neighborhood is so fascinating that I did enough research to take a visit and write a little bit about it on my on blog. What a revolutionary spot in San Francisco!