Bob Barker volunteers to stay until CBS finds a replacement 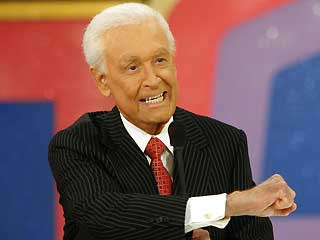 LOS ANGELES - After 35 years as the host of "The Price Is Right," Bob Barker hung up his microphone for good on Wednesday. Or did he?

After taping his last show, the 83-year-old icon said he would happily return to the "Price" stage if a replacement host isn't found by the time the new season starts in the fall.

"They're having trouble finding someone to do the show," Barker told reporters during a post-show press conference. "And I've told members of the staff here that ... if they wanted me to do it for a few more months, I would do it.

"I don't want to walk out on CBS or the company if they're in that position because they've been too good to me."

The production company left the door open Thursday on the possibility of such a return. "I am glad to know that Bob is thinking about coming back!" said Cecile Frot-Coutaz, CEO of FremantleMedia North America. "We haven't made our final decision yet because, as you can imagine, we want to make sure that we leave no stones unturned."

Barker taped his last episode — his 6,586th — of the popular CBS game show Wednesday, retiring after five decades on national television. The episode is scheduled to air twice June 15: once at its usual time and again that evening.

The silver-haired host ended his record tenure by blowing kisses and working in the same low-key, genial fashion that made him one of daytime TV's biggest stars. He closed the show with his usual, "Help control the pet population, have your pets spayed or neutered. Goodbye everybody."

Once the cameras stopped rolling, he told the studio audience: "I thank you, thank you, thank you for inviting me into your home for more than 50 years. I'm truly grateful, and I hope that all of you have enjoyed your visit to `The Price Is Right.'"

Reruns of Barker-hosted shows will play throughout the summer.

A new host has yet to be named. Among those reportedly in the running are Todd Newton of the E! network, Mark Steines of "Entertainment Tonight," George Hamilton and John O'Hurley.
Posted by Rose at 6/09/2007