The Age Of Love

I just watched the first episode of the newest reality dating show called "The Age of Love." It's like "The Bachelor", with a funky twist. The creators claim that it's a social experiment based on the question: "When it comes to falling in love, does age really matter?"
Premise of the Show
A 30 year old single bachelor (Australian tennis star Mark Philippoussis) is looking for love, but what he doesn't know is that the eligible bachelorettes are in their 40's. (One is 48 years old.) After he gets over his initial shock, (what's so great is that he doesn't hide the fact that he's shocked!) and after he gets to know the 7 women who make up the 40's group, he has to eliminate one woman. Next the show has another twist - they introduce the bachelor to 6 more eligible bachelorettes - this time they're all in their 20's. So it's 40 vs. 20 (aka "Cougars vs. Kittens".)
Showtime
The show airs on NBC, Monday nights (8 PM here in LA).
The 40's Then & Now
The most fascinating aspect of the show is the women who make up the 40's group. They all look amazing, and none look their age.

Angela (Age 28) - Then
-------------------------------------------------------
40's vs. 20's
So the show pits the 40 year olds against the 20 year olds, as both groups of women vie for the bachelor's love and attention.
I had to laugh out loud when I saw the 2o somethings on the plane flying into LA - the music in the background was perfect - it felt like "Here comes the party!" And to hear the 20 somethings bashing the 40 somethings was classic reality TV. One girl said that the 40 year olds had no chance with their "stretch marks and sagging boobs."
But of course I'm rooting for the 40 somethings! I mean come on - they look fabulous! I don't belong to either camp as I'm in the my 30's but I always root for the underdog, and I can relate more to the 40's, as they are a bit more mature.
The 20 something girls talked a lot of trash, but then were shown being completely insecure with themselves, even crying all night long. Sheesh. I guess the perky boobs don't help there.
The bachelor thought he would have a great time with the hot 20 year olds - especially after someone suggested they hop in the jacuzzi - but then there was silence. No one said a word and it was really awkward. When interviewed, the bachelor said it was like "pulling teeth" and at that point he was wondering what the 40 year old women were doing. The 40's seemed to be the more fun group. Later the same day the bachelor went with the 40's to a roller skating disco and they dressed up in outrageous 70's outfits and had a blast.
Host
The host is Kelly Ripa's husband - Mark Consuelos
Standing next to the 6'5" bachelor, Mark looks very tiny. 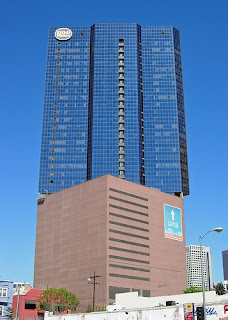 Yes, the building that you can see off of the 110 fwy that has been abandoned for so many years.
The have the 40 year old women on the 40th floor, and the 20 year olds on the 20th floor.
In the show you see a lot of downtown LA.
Tuning in next week
I'll definitely be tuning in next week to see how the show develops.
Posted by Rose at 6/25/2007