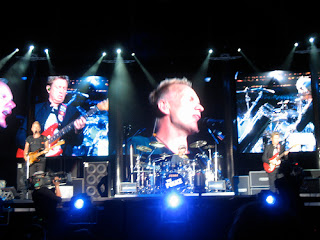 The Police reunited this year for a tour to mark their 30th anniversary, (over 20 years since their 'final' split in summer 1986). The concerts coincide with Universal Music (current owners of the A&M label) re-releasing some material from the band's back catalog.

I saw them perform at a sold out Dodger Stadium last night. 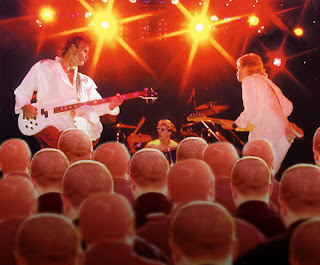 The Police in concert - Then 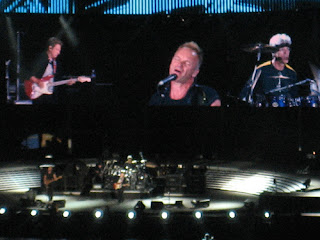 The Police in concert - Now 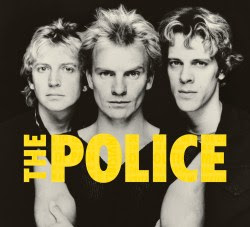 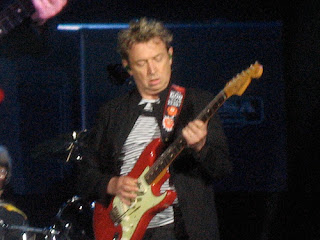 Andy Summers (age 64), guitarist- Now
Andy was wearing a stripped shirt under a blazer type jacket. When he lifted up his leg to emphasize a certain note, I couldn't help thinking the whole time, "Please don't fall. Please don't fall." At times he looked plain ridiculous - picture Tony Blair playing the guitar - and it didn't help when the camera shot him from below, at the waist up since it focused right in on his rather large gut. But at 64 years old, he can still play the guitar. 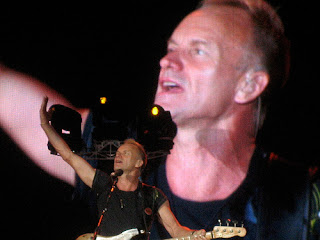 Sting (age 55), singer/bassist - Now
Sting is still hot and vital. It's quite obvious that he's never stopped performing, as he's still polished and has a great voice and presence. He was the only one of the 3 band mates who was wearing a shirt with no sleeves (which showed off his well toned arms). He gives all of us 30 and 40 somethings hope that at 55 you can still look great and be vital, vs. looking like you belong to AARP. 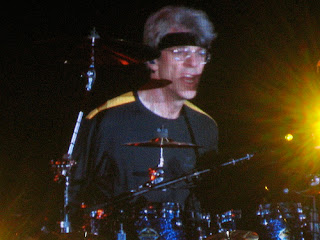 Stewart Copeland (age 54), drummer - Now
Stewart is still full of energy but that white hair makes him look old. He should dye his hair blond. The white hair ages him quite a bit. Next to Sting, you would think he was 15 years older, rather than 1 year younger than Sting. He wore a long sleeved outfit that looked like an Adidas type workout wear with a matching headband. That outfit was way too young for him. It's like Grandpa trying to look cool. But like I said, he still has a lot of energy, and watching him go at those drums made me think of a young Stewart Copeland. 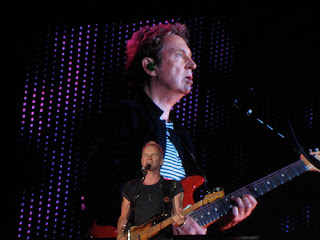 Sting looked so young (and still cool), that I felt bad for his 2 band mates who looked their age.
As a friend of ours put it bluntly, "There's something to that Yoga sh*t."
He even makes a receding hairline look cool with his super short blond mohawk. 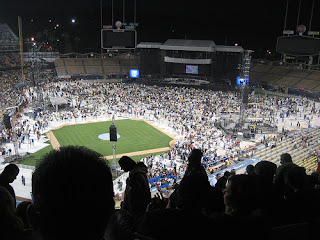 This was the first concert I've seen at Dodger Stadium. I always wondered what they did with the field. In the photo above you can see that they cordoned off the main diamond, and the outfield is covered. 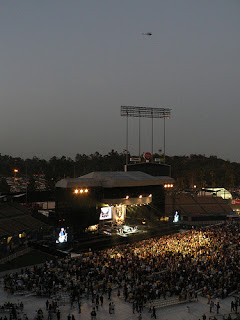 The Foo Fighters opened for The Police. I'm not a fan, but I did like it when Dave Grohl ran out into the audience, halfway down the field, and stood on the speakers next to a porto-potty and played his guitar solo for his fans. It just felt like he was giving back to his true fans (those that couldn't afford front row tickets). It took a lot of guts to run out into the crowd like that. He sprinted back just as fast, so as to avoid any incidents.

This is what Dave Grohl looks like now. The entire time he sang with his bangs covering his face. I remember when he played the drums for Nivana, and originally when he formed the Foo Fighters lots of people thought it was a joke. There was one band member named Pat Smear. He's gone now, and I haven't kept up with them, but they must be pretty big (not to mention it's an honor) to open for The Police. 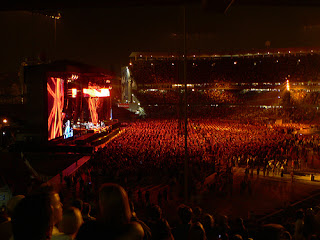 Dodger Stadium was filled to capacity. 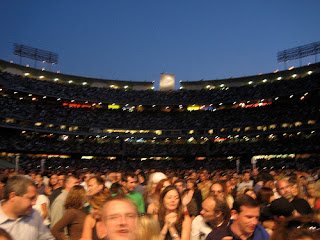 Only thing I wished they would have done was have better food when they have concerts there. Even the barely edible Subway was not there and we were only left with Dodger dog fare. I don't eat beef so the 100% beef Farmer John hot dogs were not doable. Since they allow you to bring in food, next time I'll bring a gourmet picnic basket.
On a side note, we used to have season tickets to the Dodger games, but since they raised the ticket prices and we boycotted, it's been awhile since we've been back. Since then, they've redone the entrance to the lodge section. It now has a circular bar with tables and chairs (and they planted trees!). Very nice addition. Beyond that is the gated smoking area (so it's no longer in the hallway). 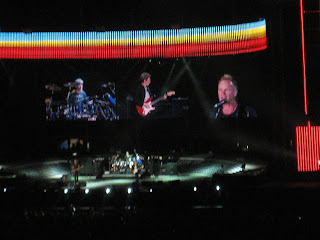 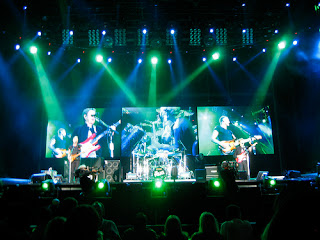 Last year I asked my husband what band he most wanted to see in concert and he had only one band in mind - The Police. He saw them play once years ago when they were in their prime, in a smaller, more intimate venue. So it was nice to see his dream come true, and watch him sing along to some of their songs. 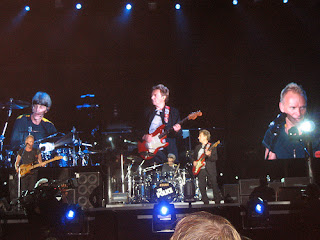 For me since I'm not a die hard fan, (but I like their music all the same), it was nice to hear them perform their old songs, and see them back together again after all these years. If it wasn't for this reunion concert, I would have never seen them live, so I have that to be grateful for. As for the excitement factor though, it was pretty nil, and Sting's penchant for having the audience echo back his lyrics (or sounds) over and over and over again got old real fast.
I wouldn't see them again in a huge venue like this again, but maybe if they play in a smaller club in a more intimate setting, I might go see them again.
Posted by Rose at 6/24/2007

Who knows where to download XRumer 5.0 Palladium?
Help, please. All recommend this program to effectively advertise on the Internet, this is the best program!