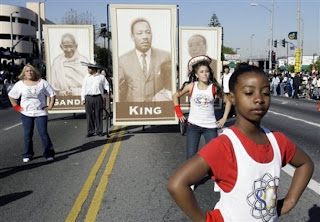 LEIMERT PLAZA PARK
4395 Leimert Blvd.
Los Angeles, CA 90008
This year we're making it a family event to see the MLK parade in Los Angeles and to participate in the festivities. It's a little slice of history, especially with Obama's inauguration the next day.

This year the parade will begin at 10:30 AM at the corner of Western Avenue and Martin Luther King, Jr. Blvd. in Los Angeles. The route goes west to Crenshaw and south to Vernon, and the entire processional should last about two and a half hours. This year’s parade will feature 18 marching bands, floats, and celebrity guests including Tyler Perry, Tony Grant, and Orlando Brown. The recommendation I'm seeing for parking is at the parade’s end near Leimert Park, where an all-day “Presidential Dreams” Fest and Gospel Celebration will be taking place with live music and food vendors.

(Previously we had planned to attend the inauguration in DC in person, but after haggling with the hotel that we reserved in November, that now wants to charge us $900 a night for a single room, that's not going to happen. Disappointing. But we all know DC is completely sold out and I've even heard people are renting tents on their property. On a positive note, it's great to see an outpouring of support for Obama and to see that it's a real movement that millions of people want to be a part of. Plus, attending the parade with our daughter on a sunny day in Los Angeles rather than in the cold - gives me something to look forward to.)
Posted by Rose at 1/17/2009

I look forward to seeing and reading your report. I'll be down there as well. Feel free to post an entry and/or photos and www.leimertparkbeat.com with a link to your site.