Flu Vaccine Mist Up the Nose 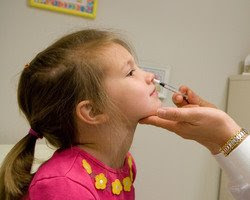 I was with my kid at her pediatrician's office and asked about getting a flu shot. I was all prepared to get my flu shot first to show her how brave I was and how it's over in a jiffy. But the doctor recommended a nasal flu vaccine and said the only side effect is a slight runny nose (and it's $5 more). No more shots? Are you serious? We're so in!
So my 3 year old daughter and I both took it up the nose. It didn't hurt at all. You just inhale it up through each nostril. Not one iota of discomfort even. I didn't even have a runny nose afterwards.
Another added benefit: It's also a good alternative for parents who are afraid of thimerosal, the controversial mercury-containing vaccine additive that's still present in flu shots.
And even better yet, it's injection free so my kid wasn't traumatized this time!
Posted by Rose at 12/15/2008

Yes, it's best to avoid 50,000 parts per billion of ethylmercury injected into the body -- especially when the EPA "safe" level for ingested water is 4 ppb.

But read the Flumist package insert -- viral shedding occurs up to 2 weeks after administration. In a clinical trial, a placebo child caught the vaccine-strain influenza from the classmates who received Flumist.

This blog is really informative; I have gone through all the posts. I don't know why the blog master is not interested in posting some more relative information. I request the blog master to add some more content to this great blog. I shall link from my blogs to this blog soon.
Best Hopes.com Offers free review service to hundreds of public utility products and service. This is for public use and people can often come to read reviews and very many products here- new products are being added to this site day by day. Whole services free for all.
The list of our review on almost all products and services are including Internet Online jobs, Make money home, Web promotion, Child custody information, saving marriages news, HIV, Cancer, Dating, Education and water fuel.
You can download the information from the following URL http://www.besthopes.com that for free. I Hope that you will add more free information to the comment boxes to let people read about these other interesting subjects.
God bless you all-