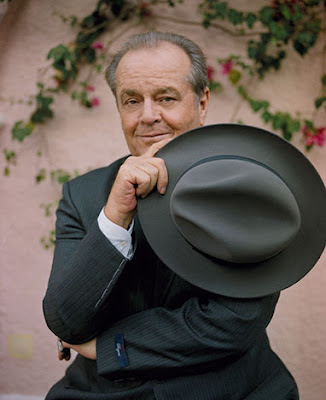 After decades of great films and grand love affairs,
‘I want to go on forever’
By Dotson Rader, Parade Magazine, December 9, 2007

His Stylist for the photoshoot - Victoria "Posh" Beckham.
After three Oscars and a decades-long career defined by amazing roles, Jack Nicholson has proven himself to be one of the greatest actors working in film today. Dotson Rader spent nearly seven hours with Nicholson in Los Angeles, his home for 54 years. Below are excerpts from their conversation.

Nicholson, known for his cool worldliness and womanizing, seems warm and expansive when I meet him in Beverly Hills. He lives on a Mulholland Drive hilltop in the eight-room house he bought 36 years ago.

“I used to live so freely,” Nicholson says. “The mantra for my generation was ‘Be your own man!’ I always said, ‘Hey, you can have whatever rules you want—I’m going to have mine. I’ll accept the guilt. I’ll pay the check. I’ll do the time.’ I chose my own way. That was my philosophical position well into my 50s. As I’ve gotten older, I’ve had to adjust.” Jack Nicholson’s hair is thinning and going gray. At 70, he has a middle-age spread and legs that aren’t as nimble as they used to be. He tools about L.A. in the back of a very large black limousine, chain-smoking unfiltered cigarettes. “My accountant tells me that if I don’t drive, I save money by not insuring myself.”
His Working-Class Childhood
“I grew up in a beauty parlor my family ran, so I’m used to getting along with ladies. I prefer their company, for the most part. I was pampered from the very beginning.”
Jack was raised in New Jersey by his grandmother, whom he believed to be his mother. Only at age 37 did he learn that his real mother was his “older sister,” June. His biological father is unknown.
"[New] Jersey's the most parochial place in the world, but the Shore, from Red Bank to Point Pleasant, was a very great place for a kid to grow up. It's a country club kind of mixed area with every kind of person there. All the way from the beach to Main Street, you could read the dollar sign on the houses. As little kids, we didn't deal with class boundaries. We were all over one another."

Hanging Out at New Jersey's Monmouth Park Race Track...and Handicapping Horses
"Even that I felt was an advantage. I was a good handicapper. That's where I got my spending money. The first car I bought was with racetrack money. Even when I worked at MGM, I ran football cards for the bookie there. In the entire season we paid off just two tickets. That's how hard it is to pick three winners against a spread."

His Catholic Family
"I've a very Catholic Irish grandmother, one of the Lynches. She is the root of the family, although my immediate family were failed Irish Catholics. So I had to haltingly investigate Catholicism by myself because nobody asked me to go to church. I was the oldest kid in my First Communion classes. In my opinion, if you're going to be theocratic, Catholicism is the most intelligent belief system."

"My family were tough-minded people who didn't go much for what they called the 'shanty Irish' or professional Irish. But they were Irish, and it manifested itself from an early age. I could always express my opinion, like everybody else, and things got talked about. I wasn't inhibited by anything."

The Passing of His Relatives
"My mother was the first to die, and then my grandmother. We were kind of on the outs because she thought I'd wasted enough time trying to make it in show business. I didn't take well to the criticism. Then she got sick with cancer, and of course I took care of her."

"The last time I saw her we talked quite a bit about life and death. You've got those bright, terminal eyes staring at you and asking you a lot of questions. I know everything about charity and hospitals because none of us had any money."

Moving to Los Angeles
"In California, I didn't know anybody except June [his birth mother], who was living here in Hollywood Park. She taught herself to type and worked her way up. I liked the idea of California. Anyway, I didn't feel I was ready to go to college and work at night. I thought I'd stay here a semester and then go home to college. Frankly, when the time came to go back East, I didn't have the money."

"I always knew there wasn't going to be anybody to help me and emotionally support me, that whatever I did I'd have to do on my own. It makes you rather desperate when you're 16 and you don't know what you want to do with your life, but you know you have to do something."

His Love for Acting
"Once I got started acting I loved it. I wanted to be the best actor possible. I worked very hard at the craft of it. I went to classes for 12 years. I'm a member of The Actors Studio. There's nobody successful who didn't study a lot. It doesn't exist."

"One of the tricks in acting is 'Don't unact anything!' If you are working and you feel like s***, don't try to make yourself look good because it all starts with yourself."

"When I made About Schmidt, I didn't feel much better than Schmidt. Same with The Bucket List. When I'd get up in the morning and walk past the mirror, I'd go, oh Jesus! Jack the semi-movie star with that gut sticking out. I'd think, 'Hell, Jack, I don't know if you'll ever come back from this one.' But by then, I was already thinking, 'I don't care.' I'm a lucky man. I'm an independent artist."

His Take on Women
"These issues between men and women are not psychological. Look, remember what a gland is. Most of these are glandular issues. A gland is what allows that mother to lift that truck off a child. Whatever intelligent design is, it's not going to leave the continuation of the human species up to fashion-crazy, flitting mentalities. It's in those glands."

"The infatuation cycle of 18 months hasn't changed a lot since the monkeys. Look at the numbers. Eighteen months is nine months doubled. A woman's entire system is set so that when you're having that procreative act with a woman, you're dealing with a being whose actual cycle is nine months. It doesn't have to do with her brain. It has to do with her entire bodily system, which is there to overcome the brain. We don't legislate this stuff. We don't out-think it. You cannot change these fundamental things that we are as human beings--but you can adjust to it."

His Extraordinary Art Collection
"I just like art. I get pure pleasure from it. I have a lot of wonderful paintings, and every time I look at them I see something different."

"I never thought about paintings as money. I bought only what I could afford at the time. I got involved in buying paintings when Diana Vreeland got me to an auction at Sotheby's in England."

"I know pictures. I've always enjoyed them. And up came this beautiful Tiepolo drawing at the auction house. I bought it for Angelica Huston, as a present. That's how I got started. I've bought things in Sotheby's that I couldn't sell to people for 10 dollars on the sidewalk outside."