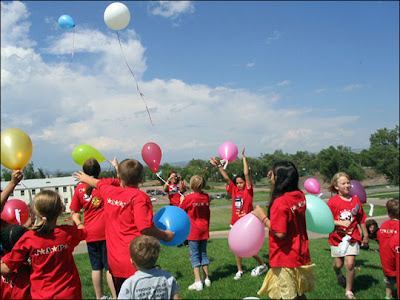 I tuned into NPR's All Things Considered this afternoon and listened to a segment about a grief camp for kids to help them deal with the loss of their loved ones (predominantly their fathers who died tragically). Since I tuned in midway through it, initially I thought it was related to the coal miner tragedy in Utah. But listening further, the camp is made up of children who lost loved ones in the war in Iraq and Afghanistan.

To hear children speak so honestly and openly about their feelings was heartbreaking and touching at the same time. For example: One little girl said she gets mad at her little brother when he says he can't wait for dad to get home to play hide and seek with him and her responding by shouting at him that dad wasn't coming home because he was dead. Another little boy was being bullied at school and told that his dad died for no reason. Another little girl asked if it was okay for her mom (now a widow) to start dating, and thoughtfully said that if she were a widow she thinks she'd be lonely.

On the last day of the camp, there is a balloon ceremony (see photo above) where children write messages to their loved ones that are attached to the strings and are let loose into the sky. One girl addressed hers to "45 South Heaven Lane." And it carried these words: "Dear dad. I love you. And I hope to see you again."

But the group gathered in a conference room at Fort Carson, Colo., had more on the schedule than summer fun.

The first hint of that was in the shiny, palm-sized buttons every child wore. They depicted fathers, brothers and uncles, all smiling and all lost in the wars in Iraq and Afghanistan. These children had lost loved ones to war, and their "Good Grief Camp" was designed to help them grieve and cope.

A private, nonprofit Washington, D.C.-based group called TAPS, the Tragedy Assistance Program for Survivors, holds grief camps throughout the year for the families of American troops who have died. TAPS was founded by Bonnie Carroll, a veteran military officer and former White House Veterans Affairs liaison whose husband died in a military plane crash in 1992.

"There is nothing more isolating than feeling you are alone at a painful time," Carroll notes. "And there's nothing more comforting or healing than being surrounded by others who truly understand what you're going through."

Carroll's group schedules summer grief camps for kids across the country to provide "an honest, safe place where they can share some very horrific details of a death, and talk openly about it."

The Fort Carson "Good Grief Camp" in August showed how even reticent youngsters can open up and share anger, pain, loneliness and loss. The children framed themselves in loss as they introduced themselves to fellow campers.

"I'm here because my dad died in Iraq," said 10-year-old Dakota Givens, in a circle of 8- to 12 year-olds. "He was in his tank … and they went in some water. The gun broke and hit his door so he couldn't get out and he drowned."

"My dad was killed in Iraq," announced Taylor Heldt, another 10-year-old, who spoke matter-of-factly. "He got hit by a roadside bomb. And I lost him June 16, on Father's Day."

Counselors guide the children through exercises, games and discussions designed to expose hidden feelings and to help the children cope. The counselors include civilians and military men and women who have also experienced loss.

It doesn't take long for the children to open up. Some tell stories about the dreaded knock at the door many military families fear.

"We thought that when we heard the doorbell it was the pizza man," recalled Angel van Dusen, a playful 11-year-old who turned somber in the group. "I went to the door and I told my mom it wasn't [the pizza man] … and the next thing I knew she came inside starting to cry."

Third-grader Katie Staats is as bright and cheerful as kids come. Her blue eyes and broad smile perfectly match those of her father, David, in the photo on her button. He died in Iraq on Dec. 16.

"That ruined my Christmas," she said. "My dad promised that no one would knock on the door. He kept that promise. My mom … met the people in the driveway."

Exploring Ways to Let Go of Anger and Stress

Anger was a common theme. The kids made "stress balls" with Play-Doh and balloons. Squeezing them, smashing them and throwing them seemed to help dissipate anger and stress. They sculpted figures with Play-Doh that they could then pound into the table — stand-ins for the enemy Iraqis who killed their dads or the kids at school who tease them.

Dakota has had that experience. "The bullies at my school would pick on me all the time and say, 'Your dad was a pussy. He died for no … reason.'"

Sometimes the hurtful words come innocently from another loved one. But there's still anger. Angel said she gets angry with her 6-year-old brother "…because my brother's always going, 'I can't wait till Dad's here cause then he's going to play hide-and-seek with me,' and blah-blah-blah-blah-blah. And I'd go 'Shut up! Dad's not alive! He's dead!' And I just started … screaming."

Counselors gently talked about not taking out anger on others and not letting anger build up. They encouraged sharing difficult feelings with trusted friends and adults.

That prompted Taylor to share something with the group. "I have a best friend and her dad, he just got back from training and he's leaving for Iraq. She started crying, and it made me cry because I don't want it to happen to her dad because her dad's really nice."

Eight-year-old Katie asked a question that indicates she's trying to figure out how her world is supposed to function now that her father's gone. "Is it OK for widows like my mom … to date?" she wanted to know.

Counselor Judy Mathewson responded, "What do you think?"

Dakota shared a desperate feeling of loss. "When I was very little when [Dad] died, I'd say, 'Mommy, give me a penny. I'm going to wish for Daddy back.' And I'd throw it in the [well] and it never happened. … I guess those things are fake. … I just really wish I had my dad back."

Every "Good Grief Camp" ends with an exercise that shows the children they can still reach out to their loved ones, even though they are gone. Each child writes a note to the father, brother, mother, aunt, sister or uncle who died in war. The notes are tied to balloons filled with helium. And with cheering and laughing and a few tears, the balloons are released into the Colorado sky.

Taylor shared the contents of her note. It was addressed to "45 South Heaven Lane." And it carried these words: "Dear dad. I love you. And I hope to see you again."

This is what guts me every time. The kids. It's too much to bear.