Hedwig and the Angry Inch in Korea 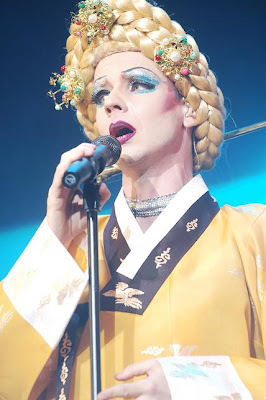 I've always loved Hedwig and the Angry Inch, the music video-esque movie about a transsexual punk/glam rock girl from East Berlin who tours the US with her rock band as she tells her life story and follows the ex-boyfriend/bandmate who stole her songs. Great songs & makeup & costumes, endearing German accent, East Berlin setting, boy who loves boy who meets girl...you get the gist.

I stuck around even after the crazy knitted half mask/half skull caps came out that looked like a cross between a Mexican wrestler mask and a rooster (with the crest on top). Hey I didn't get it but seeing the father of 3 wearing it made me smile and I went with it, hoping that I'd experience something new and interesting that night that I'd never been exposed to before.

Then the lead singer took the mike and started speaking to the audience. He said a lot before and after each song but it was all in Spanish. Someone behind us shouted, "We need subtitles!" After a few songs and realizing that the guy was not going to even attempt a single English phrase - there was a mass exodus of people.