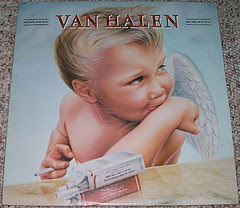 Last last year there was talk about a Van Halen reunion tour with their original front man David Lee Roth (who left the band back in 1985). It was supposed to have happened this summer, but in March 2007 Eddie Van Halen check into rehab. But now it seems to be on again, planned for this Fall.

(And for the record - yes I bought this album when it first came out - making me one of the coolest kids on the block - and I still know most of the songs by heart. If the tour ever does get off the ground - I may just go.)

According to E News: "Bassist Michael Anthony will be replaced with Eddie Van Halen's 15-year-old son, Wolfgang. Anthony had a falling out with Eddie and his drummer brother, Alex Van Halen, following the band's 2004 tour with Roth's successor, Sammy Hagar, and was not invited back."

Above is the "Jump" music video.

It'll be interesting to see if David Lee Roth can still jump and do his round house kicks like he used to.
Posted by Rose at 7/15/2007