Could it be - a Ghostbusters III? 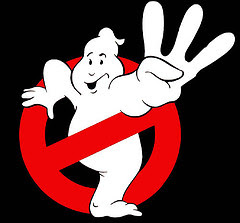 Talk about one of the most highly anticipated movies - with the original dating back to 1984. Was it really 23 years ago when I sat in the movie theater and cheered to "I ain't fraid of no ghosts"?

Above is the original Ray Parker, Jr. Ghostbusters video from 1984.
Yeah I'm dating myself. But if you too grew up in the 80's and know the punch line to "Who ya gonna call?" (remember it was the running joke of the summer?) and understand the "He slimed me!" reference, and if it's been years since you heard the name "Gozer the Gozerian" (and it brings a smile to your face), then you too have been looking forward to the third installation of this franchise. It's been too long!

"We came, we saw, we kicked its ass!"
A few years ago Dan Aykroyd wrote a screenplay for Ghostbusters 3, and the message boards lit up. Harold Ramis was on board and when the screenplay was picked up by Sony Pictures, I kept expecting to see a "Coming To Save The World This Summer" trailer...but the project got nixed when Bill Murray wouldn't sign on.

Now the project seems to be back on track:

Dan Aykroyd did a radio interview on Feb. 2, 2007 where he confirmed that Ghostbusters 3 is in the works - however they're now planning on making the movie in CGI (animation - yes a cartoon - like Toy Story). With the CGI version, Bill Murray has agreed to do the voice.

Also, the official Ghostbusters website has the following Q & A for Ivan Reitman, director of Ghostbusters I and II:

Q. Is there going to be a GHOSTBUSTERS 3? If so, what have you heard about it and what role shall you take on the project? Do you also know of a release date or shooting dates for the film?

A. We have talked about doing "Ghostbusters 3", but nothing is set. If we were to go ahead with the project, I would probably produce the film, not direct it.