Another case of life imitating art:

Today's story about a Polish man who awoke from after 19 years of being in a coma, to a new democratic Poland after the fall of Communism, is reminiscent of the German movie Good Bye Lenin!

In Good Bye Lenin! the story takes place in 1990, after the Wall has come down, and to protect his fragile mother from a fatal shock after a long coma; her son must keep her from learning that her beloved nation of East Germany as she knew it has disappeared. 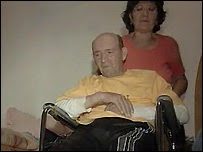 A Polish man who spent 19 years in a coma has woken up and will now have to adapt to a country where the communists are no longer in power.
Railwayman Jan Grzebski fell into a coma after he was hit by a train in 1988, the private channel Polsat said.
In an interview, Grzebski (now 65 years old) said that he owed his survival to his wife, Gertruda. "She's the one who always took care of me. She saved my life," he said.
"For 19 years Mrs Grzebska did the job of an experienced intensive care team, changing her comatose husband's position every hour to prevent bed-sore infections," said Grzebski's doctor - Dr. Boguslaw Poniatowski.
Grzebski was a father of four at the time of the accident. He is now making the acquaintance of 11 grandchildren.
Doctors had not expected Grzebski to survive, let alone emerge from the coma.
"I cried a lot, and I prayed a lot. Those who came to see us kept asking: 'When is he going to die?' But he's not dead," said Getruda.
Grzebski said he vaguely recalled the family gatherings he was taken to while in a coma and his wife and children trying to communicate with him.
Poland's communist regime was still clinging onto power when Grzebski had his accident, only losing its grip the following year, in 1989.
"When I went into a coma there was only tea and vinegar in the shops, meat was rationed and huge petrol lines were everywhere," said Grzebski, describing his recollections of the communist system's economic collapse."
On the brash neon-lit streets of new European Union member Poland, the period seems a distant memory.
"Now I see people on the streets with cell phones and there are so many goods in the shops it makes my head spin."
"What amazes me today is all these people who walk around with their mobile phones and never stop moaning. I've got nothing to complain about," said Grzebski.
Posted by Rose at 6/02/2007