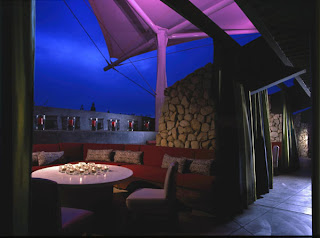 We (the hubby and I) went to Minx for the first time last night. We got tired of having dinner at the same ole local haunts on Colorado Blvd,. in Eagle Rock, after wine tasting at Colorado Wine Company (cheap & bad Italian food at Casa Bianca's or overpriced & mediocre Italian food at Columbo's) and wanted to try something new but still close by. So we decided to try Minx which is just a few miles away in Glendale, off of the 134 fwy.

Description/Decor/Review
Minx is a sleek, Hollywood style restaurant that is surprising (pleasantly so!) for Glendale. The reviews say it "gives Glendale a rare jolt of jolt of Hollywood-style panache, minus the attitude", and offers great food.

Don't let the In-N-Out burger stand located in the same parking lot fool you - the restaurant is upscale and you can have a wonderful fine dining experience there. They have valet in front of the restaurant, and albeit a bit pretentious, red velvet ropes as well.

Although it's located right next to the 134 freeway, sitting outside on the patio at night (around 9 PM) was nice and they did a good job with the decor to make it feel like you were sitting above a cityscape and the acoustics were also nice outside. As you can see from the photo above, the outside patio is covered with a white sail equipped with lights that change it's color (reds, purples, and blues), and the patio has modern stonework and water features. Inside was another story. The design beautiful, but the acoustics were bad. It felt like you'd have to shout to your date across the table to be heard, which is why we asked to be seated outside.

I literally drove by Minx everyday on my way to work, and I had read that Paris Hilton made an appearance there at their Grand Opening (not that I'm a fan) which peaked my curiosity.

I made reservations online for 8:30, but we got there a half hour late, which didn't matter because we were still seated right away. The restaurant was full, but not fully packed so we didn't have to wait for a table. It started getting busier the later it got. The staff was very friendly & courteous, and we got great service. (I had read some diners comment that the staff were rude, but we didn't experience that at all.)

Things that pleasantly surprised me:

Great Blog!! That was amazing. Your thought processing is wonderful. The way you tell the thing is awesome. You are really a master
http://www.stanchionexperts.com