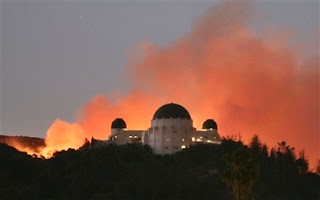 A wildfire rages behind the Griffith Observatory in Griffith Park north of downtown Los Angeles on Tuesday, May 8, 2007.(AP Photo/Matt Sayles)

I first noticed the fire last Friday sometime after 2 PM, during a meeting in our conference room on the 5th floor in Glendale. At first we could just see smoke. Then an hour later we could see flames. 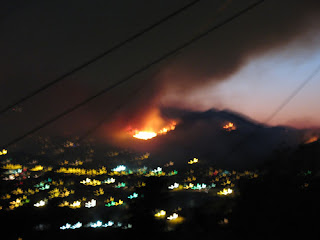 Then in the evening as I was walking down the street with my daughter, we saw a crowd of people with their cameras taking photos and video. This was the view from our street. We could see the flames covering the hillside and literally saw Griffith Park burning.

We were just in Griffith Park the weekend previous to take my daughter to Travel Town to ride the miniature train. They still don't know what caused the fire in the first place. But it's such a shame. According to the news coverage, over 600 acres have already burned.
Posted by Rose at 5/10/2007