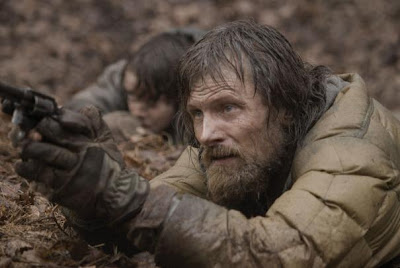 "The Road" movie- based on the Pulitzer Prize-winner bestseller from acclaimed novelist Cormac McCarthy ("No Country For Old Men") is set to hit movie theaters this October. "The Road" is a dramatic thriller/sci-fi story about a father and his young son struggling to survive in a post-apocalyptic America. All they have is each other. 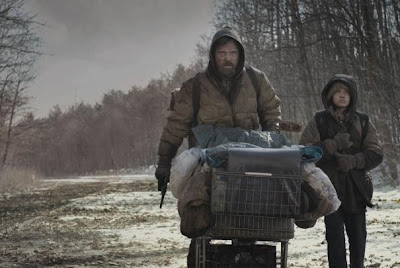 The book was my favorite of last year. The bond and love between father and his young son and the sci-fi description of a cruel/devastated world in the future, had such brilliant writing, I ended up finishing the book in one sitting & even convinced my husband to read the book. I've been looking forward to the movie ever since. If done right it should be a beautiful movie that will move you to tears and haunt you for weeks afterward. Previously I read that it ran into budget/financing problems and they didn't even think it would be released - but now it looks like it will be.
In the movie "The Road" the father is played by Oscar nominee Viggo Mortensen, and son by newcomer Kodi Smit-McPhee. Oscar winners Robert Duvall (who plays the Old Man) and Charlize Theron (who plays the wife appearing in flashbacks) make brief but "resonating appearances". The movie is done by The Weinstein Company (the same studio that did "No Country For Old Men").
Can't wait to see it on the big screen!
Posted by Rose at 5/09/2009