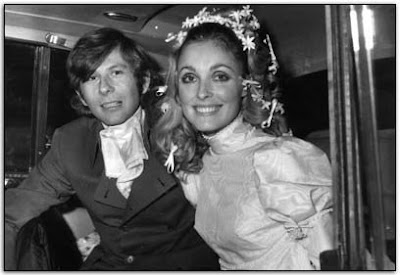 U. alerted me about a new documentary about Roman Polanski that was going to be on HBO (which is now featured on On Demand). I just couldn't keep my eyes open and fell asleep 20 minutes into it. The next night I tried again thinking maybe I was just really tired - but no cigar - fell asleep again just a bit further into the film (with the help of fast forwarding).

So tonight on my 3rd attempt I got through the entire documentary. And I determined that although yes I was tired, the reason I kept falling asleep was because this documentary is just plain boring. I would have loved to have seen something about his relationship with his wife of 18 years and his 2 children. Instead you get 2 lines of text on the screen about it at the end. BORING.
It's got some cool vintage black and white photos in it, video of Sharon Tate, and Mia Farrow gives an interview, but other than that, it's not worthy of recommending. *Yawn*
Posted by Rose at 6/12/2008