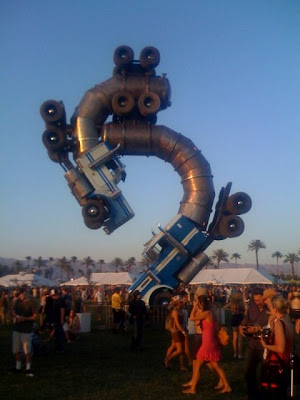 Recap of yesterday (Day 1 of Coachella)

We took an alternate back route to avoid the traffic and it was a life saver getting in and out of Coachella quickly. (Read other accounts that it took 2 hours due to all the mad congestion.) We got there at about 5:30 PM. They did a much better job this year of identifying the tents by posting marques outside each tent listing all the artists and show times. But for some reason this year they didn't use the numbered balloons to identify parking. We were in Lot 4 and luckily there were signs with arrows posted on fences, marking the way, and by using landmarks (and a water bottle on top of our car), we were able to locate our car.

Since we got there late, we didn't have to deal with the heat for that long, as it started cooling down an hour or so after we got there. Although that meant we also missed the two first bands on my pick list. But we did surprisingly well seeing many of the artists on my list (5) , walking by and seeing two others, and a couple extra that I hadn't planned on seeing.

Artists bolded below are the ones we saw
Friday
· Black Kids
· Architecture in Helsinki
· Vampire Weekend
· Tegan and Sara
· Goldfrapp
· The Verve
· Jack Johnson (walked by)
· Fatboy Slim
· Black Lips* (walked by)
The other 2 acts we saw that weren't on my list
· Santogold
· Aphex Twins
2 bands I enjoyed the most
· Teagan and Sara (ditzy but talented twin sisters. I could do without their silly banter that seemed to go on and on and on - but they've got great songs and a distinctive sound that holds up well in an outdoor concert setting.)
· The Verve (It felt like a real mega concert with a polished, seasoned band - and it was great to see the band reunited.)
Everyone was prepared for the heat (or I should say almost everyone), but after the sun went down it got progressively colder, and we saw a lot people who were not prepared for the desert cold. Being a "seasoned Coachella veteran" as U. calls me (although this year I forgot my ID which is required for the beer garden) I came prepared for the heat and cold. It always amazes me how drastic the temperature change is in the desert - going from sweltering hot during the day to freezing cold at night. This year, even with my fleece jacket it was chilly. I felt for those people freezing in their bathing suits.
When we first got there, U. made a comment about people thinking we were old folks with our hats and sunscreen. I replied that I'd rather be old and prepared than young and stupid. Just then I looked up and saw a young guy with a tank top and an awful 3rd degree burn. Even though he was no longer wearing his tank top, with his burn you could see the outline of it on my chest and shoulders. Just nuts. That's cancer time.
By evening's wrap up, we decided to go see Fat Boy Slim. He came on 30 minutes late, which is pretty unusual by Coachella standards. If I had known he was going to be so late, I would have gone and seen a couple other acts playing at the same time. But the tent was packed and it would have been hard to exit and then come back in and find our group of friends again. When Fat Boy Slim finally took the stage, he had a lot of energy and the crowd went crazy so it was a lot of fun.
I'm going to go for a swim now and head out to Coachella this afternoon for Day 2. Going to try and get there a bit earlier today so we can catch Devotchka at 3:35. More updates coming tomorrow.
Posted by Rose at 4/26/2008