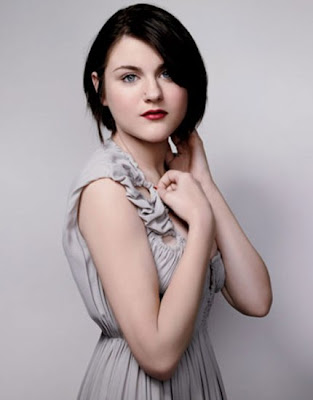 Frances Bean Cobain, 15, the daughter of Courtney Love and late grunge legend Kurt Cobain, graces the March issue of Harper's Bazaar, including a photo-spread for the magazine as Evita, and characters from Grease, and Beauty and the Beast. 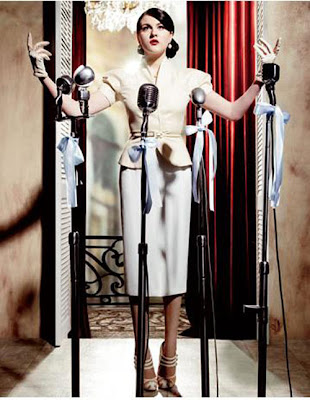 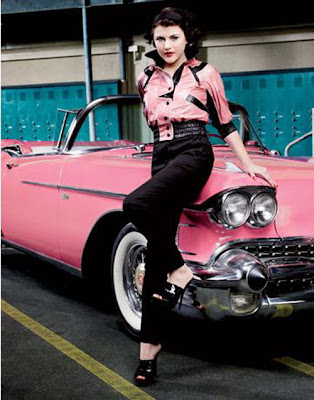 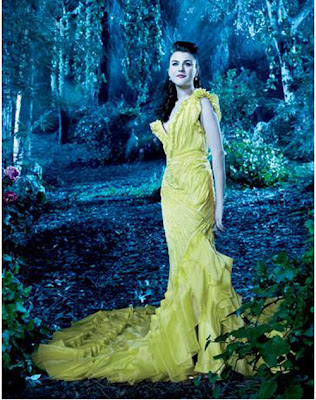 About Frances
Frances is disarmingly direct, dispensing bons mots like a 17th-century raconteur. (This may explain why the French period drama Molière is her current favorite movie.)
She's implicitly aware that this interview—with no hovering minders, no publicists, no Mom—represents something of a coming-out party. And she is dressed for the occasion in a sparkly red J. Maskrey cardigan, a navy tank, and a black American Apparel skirt. She recently dyed her hair black, accenting the look with more red lipstick, red fingernails, and — mais oui — red toenails. She has a brand-new nose piercing, too. "Mom went with me. She was freaking out because she thought it was going to be a big stud or a big ring," she says. "And, God, it hurt. It was worth it, though, because it looks so cool."
Her Genes (& her father's eyes)
But it's Frances's eyes that have it: Huge pools of "like green, blue, yellow, purple, orange, gray," they are startlingly and immediately reminiscent of her late father, Kurt Cobain. They are inescapable. "I'm very lucky because my eyes work with almost any hair color," Frances notes breezily. "Thanks for the genetics, parents. Rock on!"
Frances talks about being a child of famous parents
“These people are fascinated by me, but I haven’t done anything,” she says. “If you’re a big Nirvana fan, a big Hole fan, then I understand why you would want to get to know me, but I’m not my parents.”
Without dismissing the accomplishments of her folks (her father was dead before she was 2), Cobain advises, “People need to wait until I’ve done something valid with my life.” When asked if she planned to follow in her mother and father’s footsteps and go into music, Frances said she thought about photography and/or journalism, and might do a summer internship at Rolling Stone.
Courtney Love on her daughter
"Whatever you want to say about me, go look at my kid. ... I don't think any child has ever been more wanted. And I don't think that any parents have wanted to fuck up less."
The Loves of Frances Bean the Teenager
These days, Frances is getting on with the business of being a teenager. Picking up her Sex and the City DVD, she grins. "I am pretty much a shoe junkie. Think Carrie Bradshaw times 20. It's not even cute; it's sick."
She adores the style of Dita Von Teese. "She's like a very dark, gothic, beautiful burlesque doll. Oh, hey, want to see what I bought on eBay?" She runs to her room, returning with a curvy Dita-esque vintage purple dress. "It looks amazing on. I'm not gonna lie."
What does Frances aspire to be?
"I want to be sublimely happy. I want to be able to live in a way that isn't too hectic. Calm. And I want those around me to be sublimely happy as well.
"But," she continues, her big green-blue-yellow-purple-orange-gray eyes widening, "I'm really scared to hit adulthood because if everything is this hectic and I'm only 15 years old, what the hell is going to happen when I'm 22?"
Click here to read the entire interview.
Posted by Rose at 2/12/2008

I saw these photos too...

Seeing her kind of creeps me out! You can see her father in her eyes so clearly...

yes i think the same when i saw her.

you know what? when i saw the first picture of francis, immediately my gaze rested upon her eyes. she has her late father's eyes. they are so beautiful. she's so beautiful. how good it was if her father could see his daughter all grown up now.

With all her materialistic attitudes and comments, I don't think Kurt would have approved. She obviously takes after her mom and looks like her too. If Kurt was alive, she would not have turned out this way, sounding like Paris Hilton.

to the last anonymous and others who think shes like Paris Hilton....erm how old is paris hilton? Frances is only 15-what do you expect a 15 year old girl to be like?

Oh I dont know, hopefully she would have turned out just a little bit more like Kelly Osbourne, atleast she isn't as much of a SEEMINGLY self-absorbed dissapointment to the profound image of her father. Then again Kelly's father is still here...physically anyway lol

Oh please! Kurt wouldn't have been disappointed one bit. She is lovely and healthy... I'm sure that's all he needs. She's a 15-year-old girl just doing normal 15-year-old girl things, give her a break.

First saw her at pics from TeenVogue recently. She's gorgeous. Kurt would have been proud if he was alive and he's probably proud now.

man i saw the photo i felt soooo nostalgic... those are indeed kurt´s eyes. i also think he would not be disapointed, its hard to se that on a father.
just hope that theres more in her, than just kurt´s eyes.

kurt loved her so much when he was alive and he would adore her if he still was. doesn't matter who she looks like or what she's into. he would be proud.

of course kurt would be proud of his daughter!!! because she is his kid..and when he was alive he was always proud of frances!! in my opinion she chooses the right for herself...(sorry if my english isn't so good..)

Any 15 year old who likes Moliere has got a lot more to them than Paris Hilton. Liking shoes and wanting to be pretty doesn't make you shallow or materialistic, only if you take those ideals to an extreme.

She admits she doesn't understand why people fawn all over her, as she's done nothing other than being born to the right couple; that seems pretty down to earth to me.

Frances seem like a nice girl..didn't know she had a daugherToronto Payday Loans

wow shes sexy as hell and i dont think kurt cobain killed him even if he was a fucked up individual it was courtney who hired a hit man he had his shoes on during the murder and 3 times the lethal dose of herion in his system there was no physical way he could have picked up a gun and blue his head off.

screw all you, what the hell do you know what its like to not have your father in your life and sorry if you do. Every one that see's her just want's to know how she feels about her famous dad killing his self and how she feels about that. I'd say thanks for the reminder now kill your self dick

She is looking very gorgeous.

If I had the chance that girl has, to WEAR the clothes Kurt wore at shows and know he was a part of my life at some point, I dunno. I'd be a bit more fucking great full, that's for sure. Oh well, her dipshit mother will fuck her up. But seriously, I'd pay big bucks for the green cardigan he wore at the Unplugged in New York show and she gets to shift through it in her wardrobe. Fuck.

@Batter... Get a life loser, hopefully she, and anyone else on this planet are not as severely shallow as you obviously are. Though I am afraid there are probably others just like you, bringing down the collective intelligence of the world one brain cell at a time...

To the Anonymous who posted on 7/17/2008 7:06 AM about not turning out like her father... you're an idiot! What would you rather her turn out like her father, a heroin addict, or a good girl that loves shoes and shopping etc... Don't get me wrong, I love Kurt Cobain but I know he wouldn't have wanted her to turn out like he did... Kurt didn't like who he was, yes he made great music, but he hated who he was. At the end of the day, he was just a man alone in a greenhouse with heroine! He would not want that for his daughter!

She stays out of the spotlight, that's what he would have wanted. He even expressed in his suicide note that the thought of her turning out like him was too much to bear. All little girls like pretty things, and it sounds to me like she has a damn good head on her shoulders, considering that she doesn't have a daddy and her mother is a basket case!! Leave the baby alone you assholes!! R.I.P. Kurt <3