In Blog, a Military Man Writes About His Own Death 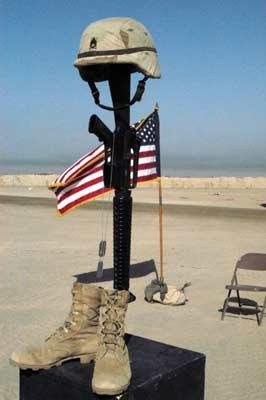 Photo by: Danny Dinges
"Only the dead have seen the end of war." - Plato
The New York Times
By BRIAN STELTER
Published: January 7, 2008
Andrew Olmsted, a United States Army major who wrote an online blog for The Rocky Mountain News, prepared for the possibility of his death by writing a 3,000-word piece.
“I’m dead,” he wrote in July 2007 as he arrived in Iraq for an 18-month tour of duty. “But if you’re reading this, you’re not, so take a moment to enjoy that happy fact.”
The major, who was 38, was killed Jan. 3 by small-arms fire from insurgents in Sadiyah, 100 miles northeast of Baghdad. The next day, a fellow blogger published Major Olmsted’s eloquent essay, leading to an outpouring of comments from more than 1,000 readers. His blog became exponentially more popular in death than in life, garnering more than 100,000 page views on Saturday.

Believe it or not, one of the things I will miss most is not being able to blog any longer. The ability to put my thoughts on (virtual) paper and put them where people can read and respond to them has been marvelous, even if most people who have read my writings haven't agreed with them. If there is any hope for the long term success of democracy, it will be if people agree to listen to and try to understand their political opponents rather than simply seeking to crush them. While the blogosphere has its share of partisans, there are some awfully smart people making excellent arguments out there as well, and I know I have learned quite a bit since I began blogging.

Blogging put me in touch with an inordinate number of smart people, an exhilarating if humbling experience."

He specifically asked that his death not be used for political purposes
"I do ask (not that I'm in a position to enforce this) that no one try to use my death to further their political purposes. I went to Iraq and did what I did for my reasons, not yours. My life isn't a chit to be used to bludgeon people to silence on either side. If you think the U.S. should stay in Iraq, don't drag me into it by claiming that somehow my death demands us staying in Iraq. If you think the U.S. ought to get out tomorrow, don't cite my name as an example of someone's life who was wasted by our mission in Iraq. I have my own opinions about what we should do about Iraq, but since I'm not around to expound on them I'd prefer others not try and use me as some kind of moral capital to support a position I probably didn't support. Further, this is tough enough on my family without their having to see my picture being used in some rally or my name being cited for some political purpose. You can fight political battles without hurting my family, and I'd prefer that you did so.

On a similar note, while you're free to think whatever you like about my life and death, if you think I wasted my life, I'll tell you you're wrong. We're all going to die of something. I died doing a job I loved. When your time comes, I hope you are as fortunate as I was."

Speaking to the circumstances of his own death
"I suppose I should speak to the circumstances of my death. It would be nice to believe that I died leading men in battle, preferably saving their lives at the cost of my own. More likely I was caught by a marksman or an IED. But if there is an afterlife, I'm telling anyone who asks that I went down surrounded by hundreds of insurgents defending a village composed solely of innocent women and children. It'll be our little secret, ok?"

His very personal & heartbreaking message to his wife Amanda of 10 years
"This is the hardest part. While I certainly have no desire to die, at this point I no longer have any worries. That is not true of the woman who made my life something to enjoy rather than something merely to survive. She put up with all of my faults, and they are myriad, she endured separations again and again...I cannot imagine being more fortunate in love than I have been with Amanda. Now she has to go on without me, and while a cynic might observe she's better off, I know that this is a terrible burden I have placed on her, and I would give almost anything if she would not have to bear it. It seems that is not an option. I cannot imagine anything more painful than that, and if there is an afterlife, this is a pain I'll bear forever.

I wasn't the greatest husband. I could have done so much more, a realization that, as it so often does, comes too late to matter. But I cherished every day I was married to Amanda. When everything else in my life seemed dark, she was always there to light the darkness. It is difficult to imagine my life being worth living without her having been in it. I hope and pray that she goes on without me and enjoys her life as much as she deserves. I can think of no one more deserving of happiness than her.

"I will see you again, in the place where no shadows fall."Ambassador Delenn, Babylon 5

I don't know if there is an afterlife; I tend to doubt it, to be perfectly honest. But if there is any way possible, Amanda, then I will live up to Delenn's words, somehow, some way. I love you."

His wish to have his last blog post published in the event of his death
In March Major Olmsted approached his friend Hilary Bok, a professor at Johns Hopkins University, and asked if she would publish a post for him if he died during the war. She said she immediately agreed. He sent a rough draft at the beginning of June, and kept redrafting until July 15, the day he arrived in Baghdad.

I saw that over on Obsidian Wings. An amazing post. The comment thread over there is heartbreaking, as one blog friend after another learns of his death.