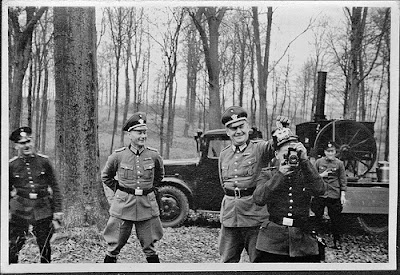 Today marks the 75th anniversary of the day Hitler and the Nazi Party took power in Germany, and the occasion has prompted a new round of soul-searching.

Most countries celebrate the best in their pasts. Germany unrelentingly promotes its worst.
“Where in the world has one ever seen a nation that erects memorials to immortalize its own shame?” asked Avi Primor, the former Israeli ambassador to Germany, at an event in Erfurt on Friday commemorating the Holocaust and the liberation of Auschwitz. “Only the Germans had the bravery and the humility.”
Construction of Holocaust Memorials and Monuments in Germany
The enormous Holocaust memorial that dominates a chunk of central Berlin was completed only after years of debate. But the building of monuments to the Nazi disgrace continues unabated.
On Monday, Germany’s minister of culture, Bernd Neumann, announced that construction could begin in Berlin on two monuments: one near the Reichstag, to the murdered Gypsies, known here as the Sinti and the Roma; and another not far from the Brandenburg Gate, to gays and lesbians killed in the Holocaust.
Germany confronts their Holocaust legacy
The experience of Nazism is alive in contemporary public debates over subjects as varied as German troops in Afghanistan, the nation’s low birthrate and the country’s dealings with foreigners. Why Germany seems unendingly obsessed with Nazism is itself a subject of perpetual debate here, ranging from the nation’s philosophical temperament, to simple awe at the unprecedented combination of organization and brutality, to the sense that the crime was so great that it spread like a blot over the entire culture.
Whatever the reasons, as the events become more remote, less personal, this society is forced to confront the question of how it should enshrine its crimes and transgressions over the longer term.
The Invitation Program for Former Persecuted Citizens of Berlin
Rüdiger Nemitz first began welcoming back Berlin’s exiled victims of Nazi tyranny, an overwhelming majority of them Jews, in 1969. Berlin flies its former citizens back for a week of visits, all expenses paid and complete with a reception by the mayor.
The Invitation Program for Former Persecuted Citizens of Berlin, which has brought roughly 33,000 people for visits to the city, once had 12 full-time staff members. Now it is just Mr. Nemitz and a half-time employee.
The program is not, however, winding down because of waning support. At a time when the Berlin city government has had to make deep cutbacks in other areas, Mr. Nemitz said, the program’s $800,000 budget has not been pared since at least 2000.
“When it started, they were grown-ups,” said Mr. Nemitz from his office on the ground floor of City Hall. “Now, it’s people with hardly any memory of Berlin. Those who come today were children then.” The visits will end in 2010 or 2011, Mr. Nemitz estimated, because there are so few victims left.
Overlooked next to the fact of the survivors’ dying out is that Mr. Nemitz’s generation, those who fought to break the silence of their parents and teachers, is starting to retire. When the last tour group leaves Berlin, Mr. Nemitz, 61, who says he is afraid to take vacations and treats his position more like a mission than a job, will shut the door to his office and retire.
Responsibility on the world stage for social justice
Some say that young Germans, who are required to study the Nazi era and the Holocaust intensively, have shown little indication of letting the theme drop, despite their distance from the events. They say that the younger generation has tackled it as a source not of guilt, but of responsibility on the world stage for social justice and pacifism, including opposition to the war in Iraq.
Others argue the continued effort to acknowledge and make amends will only backfire
Others say that the crimes are dealt with only superficially, and that the young will eventually, and perhaps in carefully guarded ways, express their exhaustion with the topic. “I can’t help but feeling that some of the continued, ‘Let’s build monuments; let’s build Jewish museums,’ is a fairly ritualized behavior," Susan Neiman, director of the Einstein Forum in Potsdam, an international public research group, said by telephone. “I worry terribly that it’s going to backfire."
Germany's future
Angelika Baumann of the city’s Department of Arts and Culture has run workshops for schoolchildren 14 to 18 years old. “We’re planning for people who aren’t even born yet,” she said.
Click here to read the entire article.
Posted by Rose at 1/30/2008