No Country for Old Men

Tonight I saw the new Coen brother's movie, No Country for Old Men based on the novel by Cormac McCarthy.

Review
The movie is worth seeing despite the awful title, (which no one can seem to remember). Take a classic shoot em up, chase em down, wild west outlaw movie with a cold blooded villain; modernize it and throw in lots and lots of violence, add one psychopathic killer, pepper with good actors and some Coen brother's humor - and you've got the recipe for this movie.

Within the first 1o minutes of this movie you see a man being strangled to death, and afterwards you're shown the scuff marks his boots left on the white linoleum floor as he struggled. It's shocking. The violence-o-dometer is off the charts. You see people getting killed in new and unique ways never before seen in a film. At the end of the movie I had a fever, literally from being so disturbed. I don't know what was more disturbing though...the violence in the movie...or the guy sitting next to me at the Arc Light who laughed while watching a man choke on his own blood.

But in summary, it's a movie that leaves questions in the end, and you're left thinking about those questions long after the film has ended. 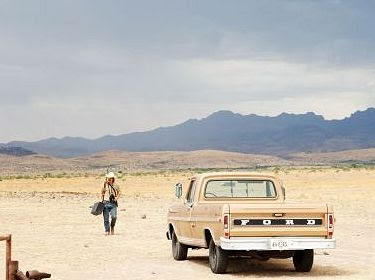 Plot
"Violence and mayhem ensue after a hunter stumbles upon some dead bodies, a stash of heroin and more than $2 million in cash near the Rio Grande."

Tommy Lee Jones (the Sheriff, Ed Tom Bell)
As always, he has the Texas drawl / speak down pat. He's believable as a 3rd generation lawman. He had some great lines. I'd like to see him nominated for an Oscar for this part.

Javier Bardem (if the Grim Reaper were human, Anton Chigurh)
He gave a bone chilling portrayal of a villain / killer. I also hope he's nominated for an Oscar for this role.

Josh Brolin (the main character, Llewelyn Moss)
Who knew the teenager from The Goonies would grow up to play such a bad*ss?

Woody Harrelson (the gentleman bounty-hunter, Carson Wells)
He's a hired man and cowboy with a sense of humor. I only wish there was more of him in this movie.

There's even a cameo by Stephen Root (the actor who played "Milton" the guy with the stapler, in the movie Office Space), who plays the Boss in this film. It was fun to see him as a completely different character.
Posted by Rose at 11/11/2007