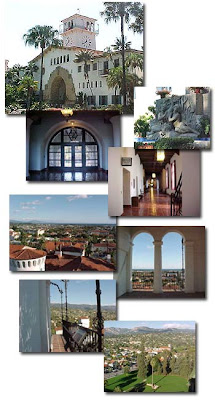 While we were having brunch at Elements, we could see Spanish dancers performing across the street.

Santa Barbara is having their "Old Spanish Days Fiesta" from 8/1 to 8/5. It's a Santa Barbara tradition that has continued for over 75 years to celebrate the history, customs, and traditions of the American Indian, Spanish, Mexican, and early American settlers that comprise the rich cultural heritage of Santa Barbara.

We discovered that the Spanish building (which has an outdoor stage where the dancers were practicing) was actually a palace built in 1929, and today is a fully functional courthouse.

We went up to the top of the clock tower and got a 360° view of the city. There's also an aerial map up at the top that pinpoints buildings and points of interest.

We saw that the Santa Barbara Museum of Art was just on other side of the street, so we decided to head over there to check it out before heading back to the train station, and back to LA.
Posted by Rose at 8/05/2007