Huge Out of Control Fire in Santa Barbara 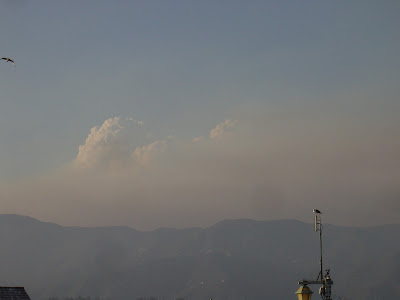 When we arrived in Santa Barbara we noticed the ash, both on the ground and still falling. The result of a fire they're calling the "Zaca Fire" that started on the 4th of July, and is still not contained. It's already burned over 70,000 acres and they expect the fire to be fully contained by September 7, 2007.

On our wine tasting tour, our driver wasn't able to take Santa Ynez Road, since it was closed due to the fire. So instead of taking the mountain pass, we went an alternate route to get to the wineries.