Branson does it again with Virgin America 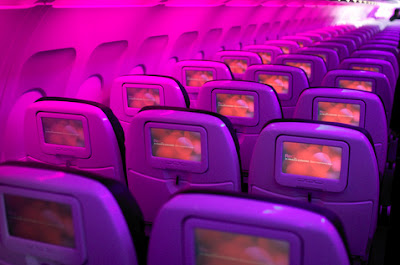 Virgin America, the brainchild of British entrepreneur Richard Branson, is a new U.S. based low-cost airline that plans to begin flying in August 2007.

Tag Line
"Everybody likes the coolest living room in the neighborhood."

Last September I flew first class with Virgin Atlantic Airways from Los Angeles to London, with my family and had a great experience. You can read about that flight here.

It was a godsend traveling with an infant to Europe, with seats that pull down into a bed (so I could sleep next to my baby), and then waking up to champagne in the morning. (If I had one complaint, it was about the complimentary in-flight hand massage which I never received on either route.) The lounge area was also great with the complimentary food & beverages and room for the baby to run around and for us parents to relax. In the London hub they also had complimentary salon & nail services and a swimming pool.

It'll be interesting to see how the domestic Virgin will measure up.