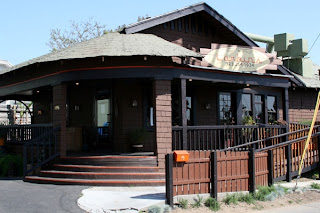 Below is my review of Larkin's (a new soul food restaurant in Eagle Rock, CA), that I posted on yelp.com.

07/22/2007
1 star rating
My husband and I went to Larkin's on 6/29/07 for dinner. It was the WORST restaurant experience we've ever had. Hence the one star.
We were both really looking forward to having dinner here, as we're locals and it's the highly anticipated new Eagle Rock restaurant, so I made reservations ahead of time.
We walked in and no one greeted us. It was like walking into someones house uninvited. We waited and waited, and finally when one employee walked towards us I thought "ok this must be it", but nope...she kept on walking right past us without saying a word. After more waiting we were approached by a second employee who took my name but never came back. Still more waiting.
After all this waiting, one of the owners (Josh) approached us only to tell us, "I'm sorry guys but we're not serving anymore tables."
What? Even though we have a reservation?
The guy gave us major attitude and made us feel awful by falsely accusing us of being over 15 minutes late.
Josh: "Oh you're Rose? Well, it'll probably be around 40 minutes until a table becomes available. We didn't think you were coming and gave your table away. Typically we only hold your table for 15 minutes. That's our policy. Just wait outside and we'll call you when a table opens up."
We looked at or watches and saw that it was only 9:14 and our reservation was for 9:00. It was at least 10 minutes of waiting. Who gives tables away after 4 minutes? Obviously they had overbooked. And furthermore what restaurant waitstaff (or owner) blames their customers? So unprofessional and rude!
Instead of being apologetic, the owner said that he didn't see us. Well maybe that's because NO ONE is manning the entrance so customers are left waiting there. He kept calling my husband "buddy" and told him to "go outside and chill".
Then he told us, "You guys have to understand this is our first weekend that we've been open. We're not ready for this. We're still figuring stuff out. No hard feelings."
We get that, but why not say that in the first place? Why makes us feel like we were to blame, when the restaurant messed up? And what's with the attitude? Then he went back inside to leave us waiting some more on the front porch. No chairs to sit on - so we had to stand. No complimentary drinks. No reassurances. Nada.
Come on guys - I took the time to make a reservation ahead of time. I didn't just show up as a last minute thought. And I got terrible treatment. Not a good first impression - especially for a restaurant where service (that generates good experiences) is of the utmost importance.
We waited for a bit but when no one came back outside after another 10 minutes we decided to go somewhere else for dinner and went to Mia's Sushi instead.
I really hope that Larkin's gets their act together. It could be a really nice restaurant - there's a lot of outdoor space that could be used for extra tables - that isn't being used.
After our horrible experience I refuse to go back for dinner - and I've stayed away on purpose choosing other restaurants along Colorado Blvd. every weekend. I still haven't even tried the food, so I may go back for breakfast if other reviewers say that the service has improved. Until then - Larkin's isn't even on my radar.
Posted by Rose at 7/22/2007

maybe the clock they had inside was not the same as yours? it's a small place . i'd give up the table too. they are a new place that was crowded. i asked last time i was there about outside seating and was told they are waiting for the permit. also, soon they would have back patio seating with live music. eagle rock has put these guys through a lot with the permit thing. so chilll out. the food everytime i have been has been amazing. the staff has been very welcoming and we always show up on time for our reservations. i always expect a few things to be a bit off on opening wekend. it's worth gving it another go.

Update: Recent reviews are mixed about the food, but agree on the poor service:

We showed up at a bit after 5 and found a sign on the door and people milling around. Larkins indicated that they were closed but would re-open at 5:30, At 5:40 they opened and a crowd entered. Because of the rush of patrons filling nearly all the tables at once, service was understandably slow. Finally a wait person came to the table and placed two Ball canning jars with water to dirnk. I suppose Larkins thinks thats cute. It isnt. We were presented with a small bowl of " Texas Cavier " black eyed peas and some pita to serve it on. The black eyed peas came directly out of a can, were not cooked and there was no mingling of flavors which can make this unusual item tastey. It definately wasn't The menu featured about 6 entrees including fried chicken, Jambalya, fried catfish. pork chop and other items. After a starter of a lettuce wedge with a very small amount of blue cheese ($7) we chose the fried fried chicken meal ($15) - a leg and thigh only, no white meat,- a glob of mashed potatoes and a bit of " gravey " The chicken was tough and disappointing. The mashed potatoes were cool ( to the taste ) and the gravey was just there. A side dish of red beans and rice was awful. The beans were not cooked, there was no bean "gravey" and the rice was dry. Having been born and raised in the south I know how wonderful a simple dish of red beans and rice can and should be. It wasn't If a restaurant is going to feature southern cooking or soul food as it suggests, it would be nice to at least reflect what is great about that kind of food. If the chef wants to take the cooking to higher levels, he should at least get the basics right first. Fresh well battered chicken, a variety of cuts, a generous hot portion of mashed potatoes and more than a teaspoon of gravey, and side dishes worthy of their heritage. Larkin's prices are high for this kind of food. Good quality would make it worth the money. It wasn't We won't be going back

I've been to restaurants where the meal takes 3 hours but they usually serve 11 courses. At Larkin's expect to get served by a confused, inexperienced wait staff who seem new to the profession of serving people. Our waitress didn't bring our pre-dinner munchies until 30 minutes later, iced teas went unfilled despite being prominently placed at the end of the table and we had to wait 10 minutes to get a pen to sign our credit card receipt. I hope that's just an off day by the waitress (she did have succulent breasts to ogle and thereby offset these annoyances). The food is great, if just a bit overpriced. Fifteen dollars for 2 pieces of fried chicken and a dollop of mashed potatoes is a bit much, even if they were delicious. The chicken is extremely crispy on the outside yet moist on the inside. I've tried numerous "southern-style" places and they do the bird good here.

Eh, forget this place. Let's go to the Oinkster!

We went to Larkins on Friday Night and it was the worst experience in our life. We had to actually come HOME to eat!! NEVER again. How they stay open amazes us!! Our Children call it Barfin's! The bill was almost $100 for four of us, and the food was the worst display of " down home " cooking I have ever eaten! Thanks, but no thanks!!!