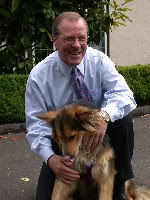 You are an inspiration!

I read today that you and your wife are going to live on food stamps for the next 7 days in observance of Hunger Awareness Week in Oregon, to raise awareness about the difficulty of feeding a family on a food stamp budget, as you begin lobbying Congress against cuts in the food stamp program proposed by the Bush administration.

When I read this my jaw dropped. A politician living on food stamps? Lobbying Congress to care for those less fortunate who need help the most? Governor, let me just say that I would love to live in a state with a Governor such as yourself who governs for the people and by the people.

I live in Los Angeles with my husband and our 2 year old daughter. In recent news there was video footage of a homeless man with no legs who was driven from the hospital to downtown LA by hospital staff, and literally dumped in Skid Row. The video showed the staff pushing the patient out of the wheelchair and leaving him stranded in one of the most destitute and dangerous places. It was inhumane and downright shameful. I was not proud to be an Angelino that day. I'm telling you this because reading about your efforts today was like a breath of fresh air. An elected official who really cares and wants to make a difference. You have my support, and you're someone I would vote for in a heartbeat.

Keep up the good work! And remember - there's still time to make your bid for election day November 4, 2008.

Sigman-Davenport, a mother of three who works for the state Department of Human Services and went on food stamps in the fall after her husband lost his job, dispensed tips for shopping on a budget. Scan the highest and lowest shelves, she told the governor. Look for off-brand products, clip coupons religiously, get used to filling, low-cost staples like macaroni and cheese and beans, and, when possible, buy in bulk.

Quote from the Governor:

"I'm gonna probably go back to what I remember in college, Top Ramen and hot dogs," said Kulongoski.

"I don't care what they call it, if this is what it takes to get the word out," Kulongoski said, in response to questions about whether the food stamp challenge was no more than a publicity stunt. "This is an issue every citizen in this state should be aware of."

More on the Hunger issue and Food Stamp challenge:

"It really re-energized me to be so much more conscious of what people are going through," said Sister Mary Scullion, the executive director of a Philadelphia nonprofit that works with the homeless, who did the food-stamp challenge last year. "It's about understanding the limited choices people have, and how money gives you choices." Those who've done the challenge say it can leave you both physically enervated and mentally exhilarated. They say shopping on such a tight budget requires plenty of planning, a reliance on inexpensive staples like legumes, beans, rice and peanut butter, and forgoing more expensive fresh fruit, vegetables and protein. Meeting friends for a slice of pizza or a cup of coffee becomes a nearly unaffordable luxury. Cheating by using staples already on hand, like ketchup or olive oil, is discouraged.

"On the spiritual side, when I did eat, I was more present," said Connecticut state Sen. Jonathan Harris, D-West Hartford, who just finished three weeks on food stamp funds. "Usually I'm watching TV, shoveling things in, not thinking that I am blessed." Like Kulongoski, Harris said, he's lucky to have a car to get to a grocery store and a kitchen in which to prepare food. And like Kulongoski will have to do, he had to resist the free goodies at state receptions and business lunches. The experience has helped him as a policymaker, Harris said, in discussions such as whether to expand the earned-income tax credit in Connecticut. "I personally felt how a few extra hundred dollars in the bank to supplement my nutrition would make a major difference in my life," he said.

Hunger has been a major issue in Oregon, ever since the state was embarrassed by having the country's highest hunger rate in 2000. Hunger groups launched an effort to get more people signed up for food stamps, and the state's ranking fell to 17th.

Karen Wilson, director of the Greater Philadelphia Coalition against Hunger, said Kulongoski's support of the food stamp challenge is particularly notable, given the time of year. "People only seem to focus on hunger and food insecurity around the holidays," she said. "People are hungry year-round."