Olivia Newton-John and her 21 year old daughter, Chloe Rose Lattanzi did an interview with Entertainment Tonight where they talked about Chloe's struggles with anorexia and trying to overcome her eating disorder. 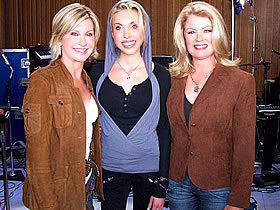 I've always loved Olivia Newton-John. I remember in the 80's she was so HUGE. Then she kinda disappeared for awhile and then she reappeared in the headlines for the 20th anniversary of Grease, then her boyfriend mysteriously disappeared during a fishing trip in California, and now her daughter battles anorexia and is releasing an album.

At the height of her disorder, Chloe says her anorexic crisis led to a memory loss so severe that she can't remember most of the time she was starving herself.
"You can't make your child eat if she doesn't want to," adds Olivia. "There was a time I was in denial about it. I have to admit that, because you don't want to think that anything could be wrong -- not to say I wasn't frightened, and nervous, and anxious for her."

I must say, after watching the video clip of the interview and photos of Olivia and her daughter - Olivia at age 58 is still more beautiful and photogenic than her 21 year old daughter. It must be hard to live up to the image of your famous mother who is both gorgeous and thin. But she seems to be following in her mother's footsteps with her singing and acting career.

She has a heck of a voice. i didn't know the girl could sing. She can't sing, that girl can sang

I never knew that her daughter was anerexic!