Bob Barker to retire from The Price is Right 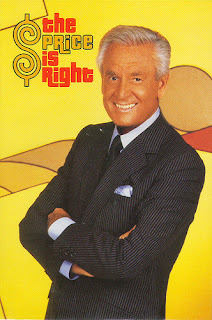 Legendary host Bob Barker, 82 is retiring from the Price Is Right, after 35 seasons.

"I want to retire while I'm still young," said Barker.

Ever since his upcoming retirement was announced, I find myself waking up in the middle of the night in a panic - "Did Bob Barker retire already?!" I'm overwhelmed with regret that I may have missed his last appearance on the show.
Good news - I haven't missed it. His official retirement is in June 2007, but there are a few more chances to see him before then:

Wednesday, May 16, CBS will present The Price is Right Million Dollar Spectacular," Barker's final appearance in prime time hosting the show he has led since 1972. In this special primetime edition, contestants will have the opportunity to win bigger prizes and the chance to spin the wheel for $1 million.

CBS is also airing 2 primetime specials paying tribute to Barker in May. The specials will be broadcast Wednesday, May 16 and Thursday, May 17 (8:00-9:00 PM, ET/PT) on the CBS Television Network.

I will be sad to see him go.

He's been such a fixture on that show and it's definitely the end of an era. I've grown up with him on the show and I will miss his familiar voice saying, "Come on down!" Many a sick day I watched The Price Is Right while curled up on the couch with a box of Kleenex. He genuinely seemed to find something interesting about every contestant - "Where are you stationed soldier?", or "What are you studying at xyz University?" and then there were those desperate housewives that wouldn't stop kissing and squeezing him. All the while trying to win that brand new American car. I mean talk about a piece of Americana!

When he stopped dyeing his hair black (to protest the way animals are used to make the products) I thought he looked a bit strange, but then I got used to the gray hair. When that sexual harassment scandal broke out that he was sleeping with one of the Price Is Right models, I even forgave him. This is the same man who after decades of hosting the Miss USA and Miss Universe pageants left in 1987 when they refused his request to stop giving furs as prizes. So he can't be all that bad.

I heard that George Hamilton is scheduled to replace Bob Barker as the host on The Price is Right. Pretty good choice if you had to pick a replacement (a little cheesy and charming at the same time with that trademark tan), but it still won't feel the same without Bob.

*The Price Is Right is TV's longest running game show.
*Since it premiered Sept. 4, 1972, on CBS, Barker has taped 6,482 episodes of the show, a frenzied contest centered on players' knowledge of product prices.
*Barker, born Dec. 12, 1923, grew up on an Indian reservation in South Dakota.
*Barker started out his career in radio.
*One fan hugged Barker so hard he says he tore a ligament in his side.

"The show was top-rated when we started, and we have never had a ratings problem," Barker says. "How many shows can say that over, five years, 10 years, let alone 35 years?"

CBS president Leslie Moonves in a statement called Barker's contribution and loyalty "immeasurable. ... We knew this day would come, but that doesn't make it any easier." My sentiments exactly.

You can count on me to tune in...
to hear Bob Barker's signature sign-off after the Showcase Showdown, one last time: "Help control the pet population. Have your pets spayed or neutered." And then watch it cut to commercials while I'm still in denial about it being his last show.

Tell Bob What He Means To You
CBS Interactive is offering fans the chance to say goodbye to Bob Barker by submitting 15 second videos on YouTube.
For more details go to:
http://www.cbs.com/originals/15_seconds/
Posted by Rose at 4/30/2007