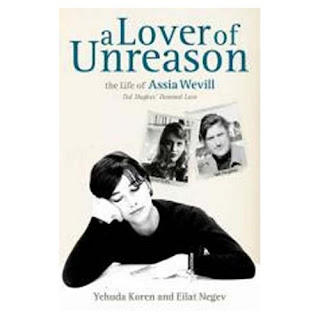 In 1963 when the famous American poet Sylvia Plath committed suicide, her husband Ted Hughes, (British Poet Laureate from 1984 until his death in 1998) was with another woman, Assia Wevill who was pregnant with Hughes' child. Their love triangle was no secret, however the details about what happened to his mistress, Assia Wevill, who six years later in 1969 gassed herself and her four year old daughter Shura (allegedly Hughes was the girl's father) in her kitchen in the same fashion as Plath, were almost erased from history.

For some mysterious reason, the press refrained from reporting the tragedy. Only one local paper, the South London Press, violated what amounted to a hush-up. Even there, the story was at the bottom of page 13, and omitted any hint of an intimate connection between the poet and the deceased.

A new biography called: A Lover of Unreason: The Biography of Assia Wevill was published in Dec. 2006, and for the first time ever it tells the story of the woman that the poet, Ted Hughes tried to hide, with details about their eight-year relationship, which contributed to the ending of his marriage to Sylvia Plath. The book's title is from Assia Wevill's self-composed epitaph: "Here lies a lover of unreason, and an exile." Yehuda Koren and Eilat Negev, the two authors that wrote this book claim that it took them 20 years to write it by painstakingly doing all the research needed by interviewing those closest to Plath, Hughes and Wevill, including a rare interview that was granted by Hughes himself.

I can't wait to get the book in my hands and tear through it. I've always loved Sylvia Plath's poems and I found her suicide to be a tragedy in the nth degree. I thought the story ended there, but now I find out there's more - an entire chapter that goes on and eerily repeats itself in the end with an almost carbon copy suicide by "the other woman" and murder of her four year old daughter.

Here are some tidbits I've read so far from reviewers and those who've read the book:

Gotta read that book. I have had a minor interest in Hughes, Plath and Wevill for almost 30 years.

How terrible is the destiny of this family !