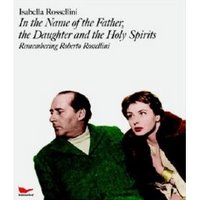 Isabella Rossellini wrote a book "In the Name of the Father: the Daughter and the Holy Spirits; Remembering Roberto Rossellini" and made a short film, "My Dad is 100 Years Old" an homage to her father, Roberto Rossellini, the famous Italian director (born 5/8/1906; died 6/3/1977) to mark the 100th anniversary of his birth.

I've always loved Isabella Rossellini and thought she was beautiful (she still is at age 54), well spoken (she speaks Italian, French, and English fluently), funny, and fascinating (with her famous parents and upbringing).

I saw her appearance on "Charlie Rose" and when I heard her talking about her book and short film (the DVD is included with the book), I had to purchase the book from amazon.com. It's a very sweet, and touching tribute to her father who she loved deeply. It's an easy read and I finished the book while in the airport waiting for my flight.

Isabella writes: "My father was a Jewish Mother. But let me add something about him that I can say only now that he's dead. He was fat. In my family, this fact was always diplomatically diminished with, "He's not fat, he's robust." When we were children (there were seven of us), one of our favorite games was throwing ourselves onto Daddy's body. Lying on his side, he pretended to be the sow and we were the piglets. My dad always regretted not being able to nurse us in real life, though for a long time I believed he was pregnant."

The short film (17 minutes long) was written by Isabella Rossellini and she also stars in the film and assumes the roles of her mother (Ingrid Bergman), Alfred Hitchcock, Charlie Chaplin, Federico Fellini, and David Selznick. Her father is represented by a big belly - "the big belly he envied pregnant women, the big belly I've embraced so many times and where I took my best naps cuddling against it as a cushion." It's surprisingly well done.

I've never seen a Roberto Rossellini film, but after reading this book, and watching the film, it makes me want to run out and rent his films. According to Uwe (and many critics) his films are very slow and drawn out (and always shot in black and white), but there are a few classics I'd like to see like "Open City", "Paisan", and "Stromboli".

Ingrid Bergman quote: "I think that deep down I was in love with Roberto from the moment I saw Open City, for I could never get over the fact that he was always there in my thoughts."

Ingrid Bergman writes in her autobiography (a chapter included in this book) about Roberto Rossellini and their 7 year marriage (which included 3 children):

"I tried many ways to live with him. I remember saying to him during the difficulties we had with money, 'Look, let us go bankrupt. People go bankrupt, don't they? What can happen? We don't go to jail, do we? Let us just live on whatever we have. Let them take the house away. Give it all away, everything, everything. And we start from nothing. We take a small apartment. I shall do the cleaning, the scrubbing, cook the food. We won't have any servants or anything. '"

"And Roberto looked at me as if I were mad. 'That life isn't worth living.' he said. That was such a slap in my face because I thought I offered him everything and he wouldn't even think of it. 'That life is not worth living!' Life had to be in the grand style."
Posted by Rose at 7/17/2006

I might like to read that book. My father was the exact opposite--not the cuddly, rest your head on his shoulder type at all. Isabella R. is one of my favorites as well.